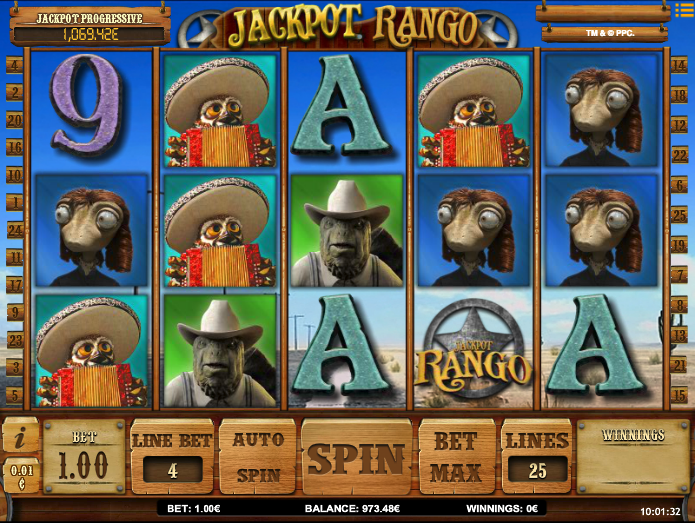 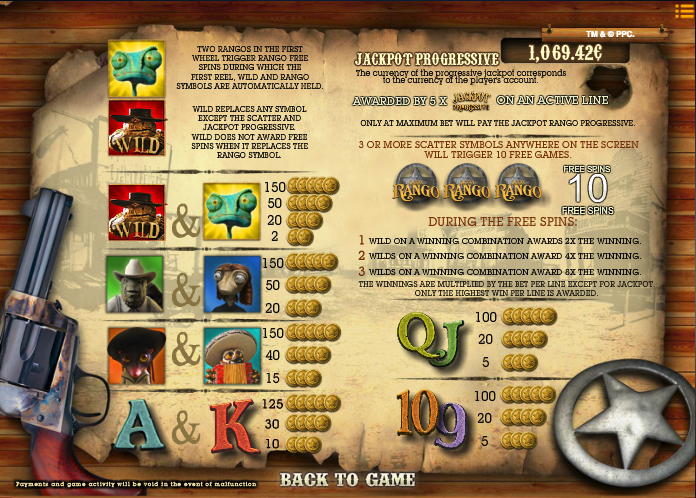 If you’ve not heard of Rango until today then he’s the lizard star of a 2011 animated movie and now he’s also the theme of an online machine from iSoftBet; it’s called Jackpot Rango which means there’s also a progressive jackpot to aim for – read all about it below.

Jackpot Rango is a five reel slot with three rows and twenty five fixed paylines; the desert environment in which the movie takes place forms the backdrop to the reels with the progressive jackpot total tempting us from the top left hand corner.

The high value symbols are Rango and then four other characters from the film which we won’t pretend to be able to identify; 9, 10, J, Q, K and A make up the lower values.

The snake in the hat is wild and it will replace all others to help form winning combinations except for the game’s logo scatter and the jackpot symbols.

This is triggered by landing at least three of the game’s logo scatter symbols anywhere in view and you’ll receive ten free spins. During this round one, two or three wilds in a winning combo will multiply that win by 2x, 4x or 8x respectively.

If you can land two Rango symbols on reel one you’ll receive a handful of free spins (a random number) in which that reel, any wilds and any more Rangos are held in place.

Nice and simple – this is won by landing five of the progressive  jackpot symbols on an active payline and your prize will be the amount shown in the top left hand corner.

Jackpot Rango is a very high quality game which channels the spirit of the movie very well, so much so we may even track it down and watch it to find out what it’s all about. Two bonus features and a progressive jackpot are the icing on the cake.