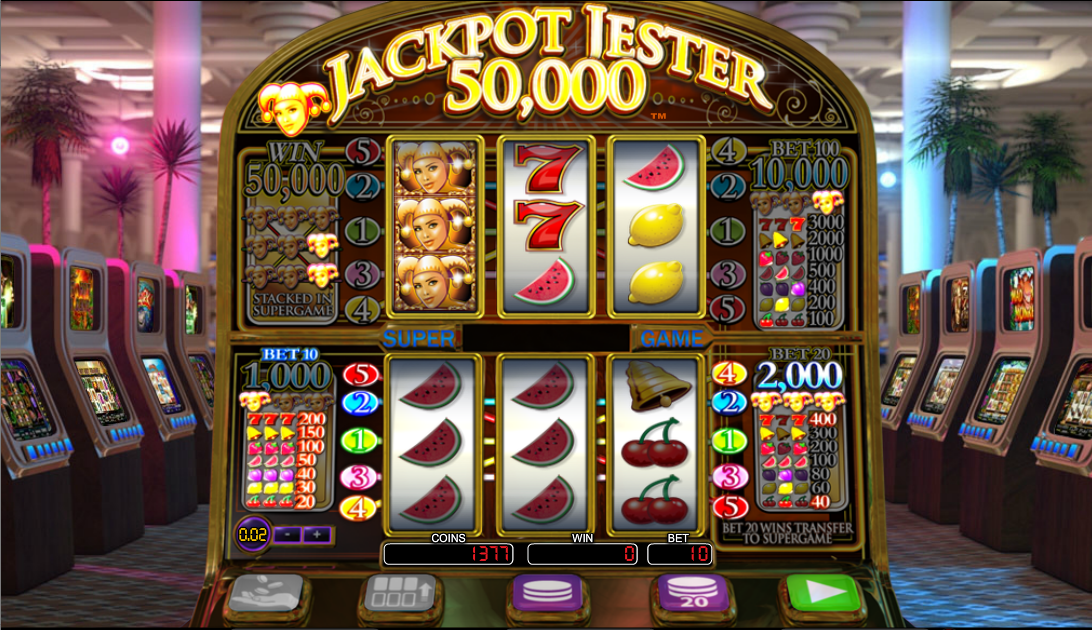 We’ve been playing a selection of NextGen Gaming online slots recently and it’s well worth checking out games such as Beat The Bank and Foxin’ Wins for some really innovative ideas.  Jackpot Jester 50,000 is the first three reel slot we’ve played from this company and it offers more than just the classic three reel experience. If you’re looking for something a little different, give this a go.

At first glance Jackpot Jester looks like two sets of reels stacked on top of one another and that’s pretty much what it is; there are five paylines on both reels and the symbols are a range of fruit and sevens which will be familiar to lots fans everywhere – cherries, lemons, plums, melons and the like. The Jester symbol is wild and it can also win you the top prize of 50,000 coins.

There’s no real bonus feature here as such but we’ll explain how the twin reels work; the base game is played on the lower reel and this acts as a traditional three reel and five payline slot.  However if you are betting a minimum of 20 coins then a win in the lower level will transfer the winning credits to the upper reel.  When you have sufficient credits to spin the top reel you can do that, or you can just collect your accumulated winnings.

Spinning the top reel costs 5x the base game stake and the prizes you can win are proportionately greater.  The temptation of course is to spend all those lower reel winnings on the Super Game but that’s the way to lose your money.

Our advice here is to take care when playing the Super Game; of course this is the way to win the big bucks but it will also eat up all of your winnings pretty quickly if you’re on a losing streak.  We generally collect half of our winnings and invest the other half in the Super Game.

NextGen have produced an entertaining game here which looks great (as does the realistic casino background) and it clips along at a nice pace.  It’s probably one for the classic slots purists but everyone should give it a go.