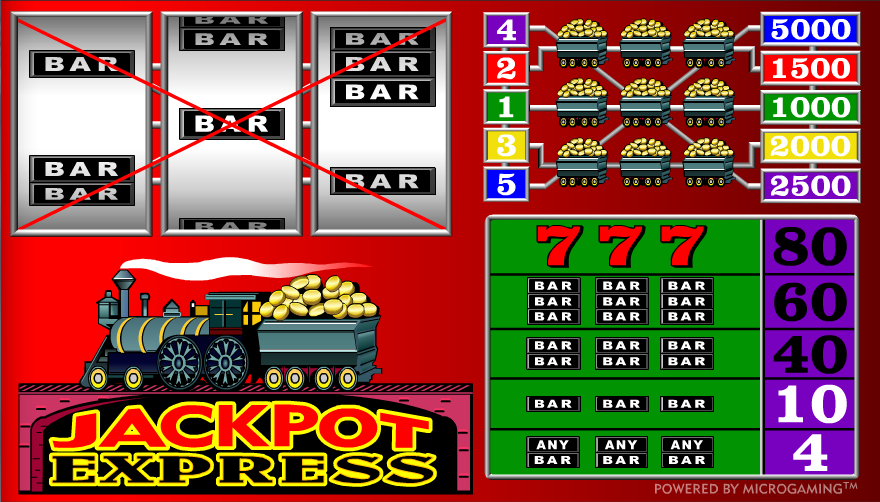 There’s nothing wrong checking out the simpler life occasionally and that applies to the world of online slots as much as any other part of life. That’s why we sometimes like to play the classic slots which used to occupy our time before the introduction of much more complex five reel games with bonus features and other bells and whistles. This particular one is called Jackpot Express and it’s from Microgaming, a company with a solid track record of producing enjoyable games.

Jackpot Express is a three reel slot with up to five paylines and the theme is apparently based on a steam train transporting a wagon load of  large gold coins to some lucky, anonymous recipient. Although the train appears to be stationary we know it’s not because there’s a trail of steam wafting back from the chimney stack.

The image is underneath the reels which occupy the top left hand corner; on the right we have the paytable which displays all the information needed to play this game.

The wagon full of gold coins is the important symbol here; it’s the most valuable and worth 5000x your line stake for three on payline number five (that’s the one which runs from bottom left to top right) but it’s also the wild symbol which will substitute for any other icon to form a winning combination.

Those lower value symbols include single/double/triple bars and some big red sevens.

When you’re ready to begin you need to select your basic bet level with the small ‘+’ and ‘-‘ buttons at the bottom of the screen. Now you can use the ‘Bet One’ button to choose between one and five paylines to give a betting range of between £0.25 to £25.00.

You can only activate the paylines in numerical order so if you want the chance of winning the 5000x jackpot prize you will need to have all paylines active. Doing this means a minimum stake of £1.25 per spin.

This is another solid classic slot from Microgaming and it follows the design of a number of other games from the same developer. There are no bonus features here but we don’t care about that – the wild symbol adds a frisson of excitement.