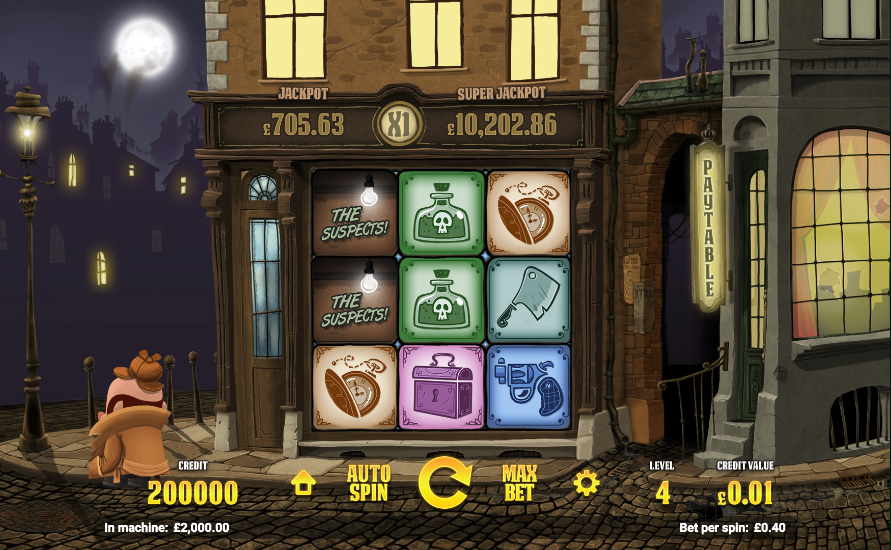 Fighting crime is one of the staple themes of the online slots industry and here we can introduce you to Inspector Clueless; he’s the main character in this release from Magnet Gaming, he has a somewhat unfortunate name but he’s here to try and help you win some cash – so find out how!

Inspector Clueless is a three reel slot with three rows and eight fixed paylines – in fact the paylines are the three horizontal, three vertical and two diagonal directions. Those reels spin in a shop window lit by a lamplight under which Clueless stands, getting soggy in the rain.

The symbols are all related to the reels and include the crown, the safe, the cash, a pocket watch, the poison, the gun and the meat cleaver.

There’s no wild symbol in Inspector Clueless but there are four bonus symbols – the Game Flash, the Case File, Stop Thief and The Suspects.

Any winning combo will trigger a respin and increase the multiplier value for any win; those multipliers increase through 1x, 2x, 3x and 5x or until there are no wins.

Trigger this by landing three Game Flash symbols on a payline and you’ll see various cash prizes and features on Clueless’s notebook; one will be randomly picked for you to play or receive.

This is triggered by landing three of the Case File symbols on an active payline and you’ll now receive twenty free spins on a set of reels which also include little clues (a fingerprint, a glove, etc) on some of the symbols. The clues are required by the mugshots on the left and when one is full you’ll be paid out and move on to the next criminal. Each clue grabbed will award an extra spin and the Jackpot Flash can also be activated here.

Activate this by landing three of the Case File symbols on an active payline and you’ll get to play a board game in which Clueless must chase a criminal around the board. You’ll get ten spins of the spinner and be asked to move the set number of spaces, picking up various prizes along the way and trying to land on the crim. Capture the baddie to move to the next one – the first will award the Jackpot Flash, the second three extra spins and the third the Super Jackpot Flash.

Trigger this by landing three of the The Suspects symbols on an active payline and you’ll now get twenty picks of the thirty two drawers in front of you. Each will reveal prizes, pieces of the criminal jigsaw puzzles at the top or a golden piece which can be placed on any puzzle you like. Completing the puzzles will award bigger prizes and completing all four will award Jackpot Flash.

Magnet Gaming seem to be miles ahead when it comes to in-depth bonus features and Inspector Clueless is another demonstration of that intent; it’s engrossing, entertaining and you’ll want to keep coming back for more. This game comes with an RTP of 96.50%.