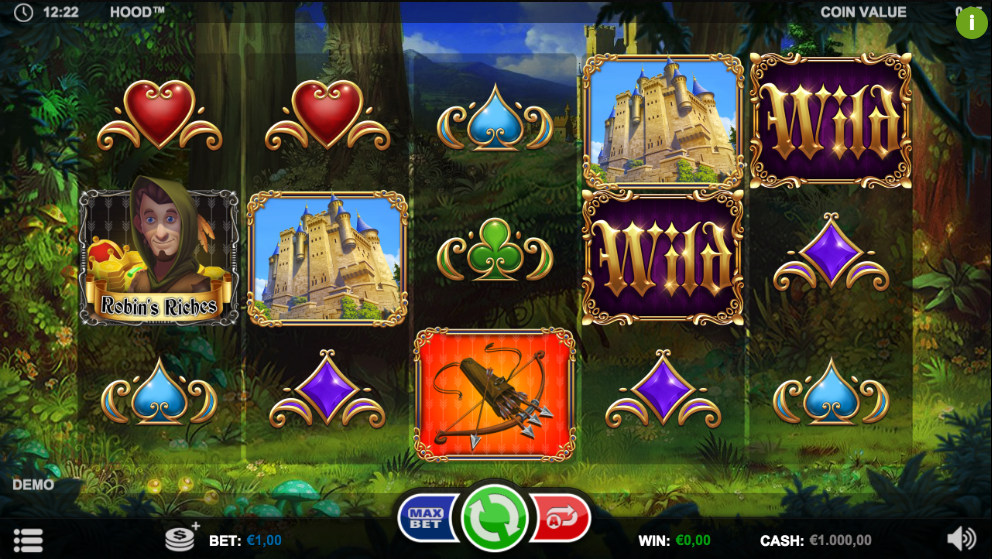 The legend of Robin Hood is a well trodden one and there are various online slots already themed on this legendary character; one more is always welcome though and here we have Hood, a game developed in-house by Betsson and featuring a number of themed bonuses.

Hood is a five reel slot with three rows and twenty fixed paylines; those reels spin against a distant view of Nottingham castle just visible through the leaves and trees of Sherwood Forest.

The higher value symbols include Maid Marion, Friar Tuck, Will Scarlet, Little John, a bow and arrow and the castle; playing card symbols make up the lower values.

The wild is a golden ‘Wild’ and this will substitute for all others to help form winning combinations except for the treasure chest and the Robin’s Riches scatter symbols.

This is triggered by landing three of the Robin’s Riches scatter symbols anywhere on reels one, three and five; you’ll now get a spin of the Wheel of Fortune which will determine which of the following features are awarded:

The Treasure Chest appears only on reel five and when it does it will a prize of between 60 and 450 coins.

Maid Marion and Friar Tuck can appear stacked on reels two and four and if one of them does so you’ll win 1000 coins.

On any losing spin in the base game, one of the following mini-features may be awarded:

We’ve enjoyed playing Hood with it’s intricate, detailed graphics and numerous bonus features; it’s a slot in which there’s always something happening and a win seems to be just around the corner. It comes with a nice, high RTP of 97.38%.