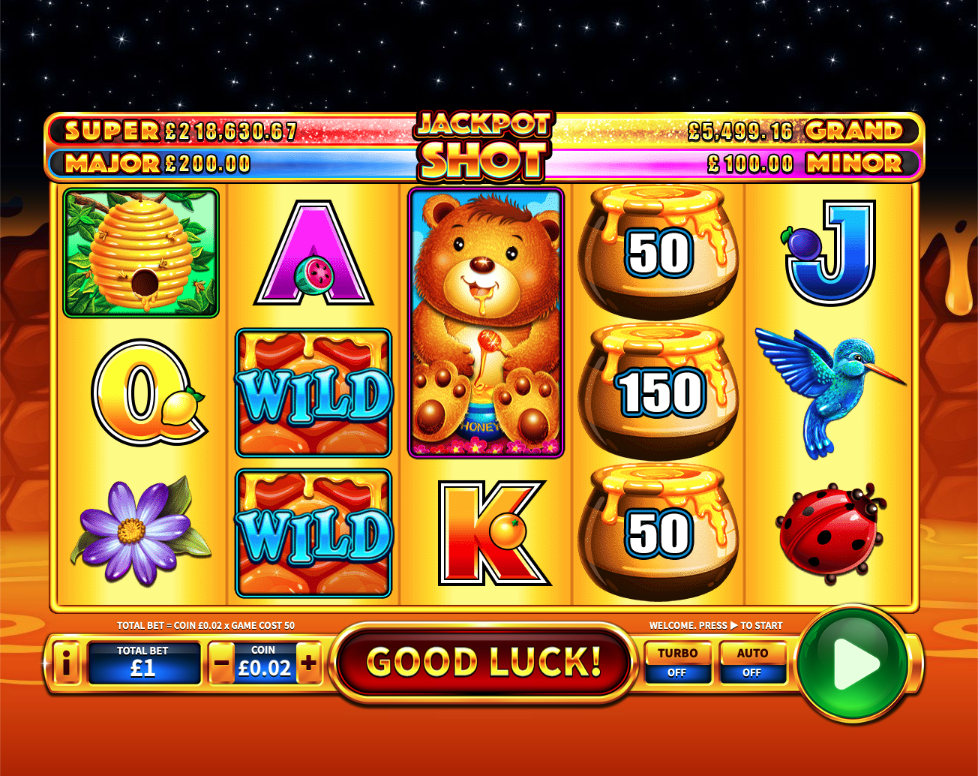 If you’d like to try an online slot machine themed on the birds and the bees (but not the type you’re thinking) then perhaps consider this charming game from Skywind; it’s called Honey Shot Jackpot and from £0.50 per spin it promises players Money Shot Respins, the Jackpot Shot and plenty of free spins.

Honey Shot Jackpot is a five reel slot with three rows and thirty fixed paylines; it’s all about the quest honey and those reels hover over a large lake of the sweet stuff.

High value symbols include the stacked bear, the hummingbird, the ladybird, the butterfly and the purple flower; J, Q, K and A make up the lower values. The blue ‘Wild’ is wild and the beehive is the scatter and the pot of honey is the bonus symbol.

Kick this feature off by landing at least six of the honey pots anywhere in view – they’ll lock in place for three respins but if any more pots land you’ll receive an extra two spins. The prizes are awarded when the round ends and each pot can display a cash value, Free Games or Money Shot which will award between 1000x and 10,000x the coin bet.

Filling the reels with honey pots will trigger the Jackpot Shot and award a spin of the wheel which can result in cash prizes or one of the progressive jackpot sums.

Landing at least three of the beehive scatter symbols anywhere in view will award an initial ten free spins but during the round two beehives will award five more; the wilds become multiplier wilds with 2x on reel two, 3x on reel three and 4x on reel four and those values will be applied to any wild win.

Honey Shot Jackpot comes with some very cute animals, plenty of bonus features and a shot at the progressive jackpot for the luckier players; the only grips is a slightly low RTP of 93.96%.