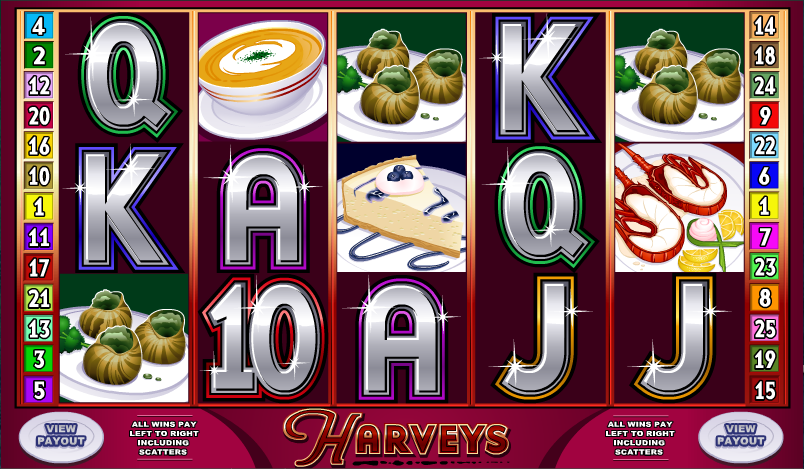 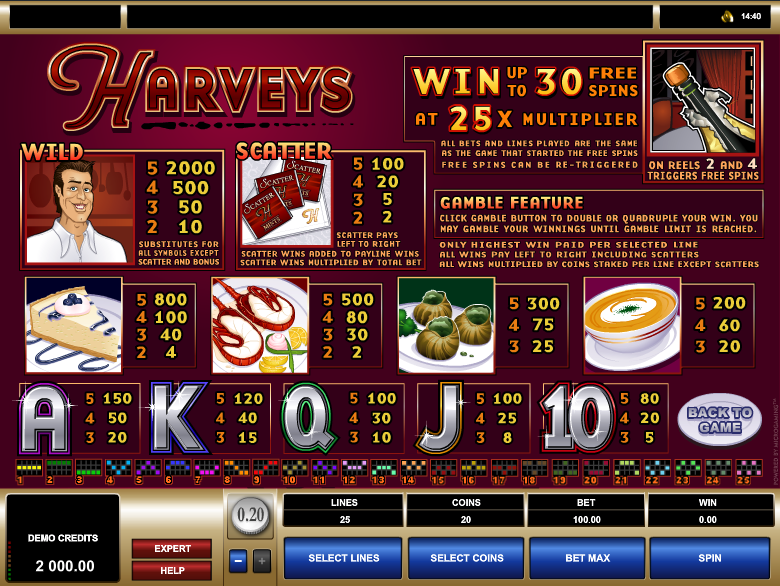 If you’re having trouble making up your mind between going out for some fantastic French cuisine at a swanky restaurant or staying at home and having some fun on the reels, Harveys may offer something of a compromise. It’s an online slot from Microgaming which tempts the player with a range of tasty-looking food and refreshing champagne.

Harveys is the name of the restaurant and this slot and it plays out over five reels and twenty five paylines; the design of the game is pretty basic and the lower value symbols are the standard 10, J, Q, K and A but several mouth-watering dishes make up the more valuable ones – a bowl of soup, les escargots, some shellfish and a tasty dessert.

The handsome waiter is wild, the red matchbooks are the scatter symbols and there’s also a champagne bottle on reels two and four which activates the free spins.

In this game the feature is not triggered by the scatter symbols but by the champagne bottle which appears only on reels two and four. If you can land the bubbly in the right places you will receive a random number of free spins up to a possible thirty and a random multiplier up to a generous 25x.

Landing more champagne bottles during this feature will win you more free spins, which is always a bonus.

If just playing this game doesn’t provide you with the gambling buzz you need, each time you win you can try and double or quadruple that amount by using the game’s gamble feature. Just click the ‘Gamble’ button below the reels and and you’ll get to play a card prediction game; guess the correct colour to double your prize or the correct suit to quadruple it.

If you want to keep risking your money you can play up to five times in a row, as long as you win.

Always be wary of the gamble feature; the odds of repeated wins are heavily against the player so don’t test it out too often and when you do, take your winnings after one or two successful guesses.

This is a largely run-of-the-mill game slightly enlivened by an unusual theme; we like the nicely animated waiter who chops things up if he helps in a winning combo but there’s not too much else to recommend it.