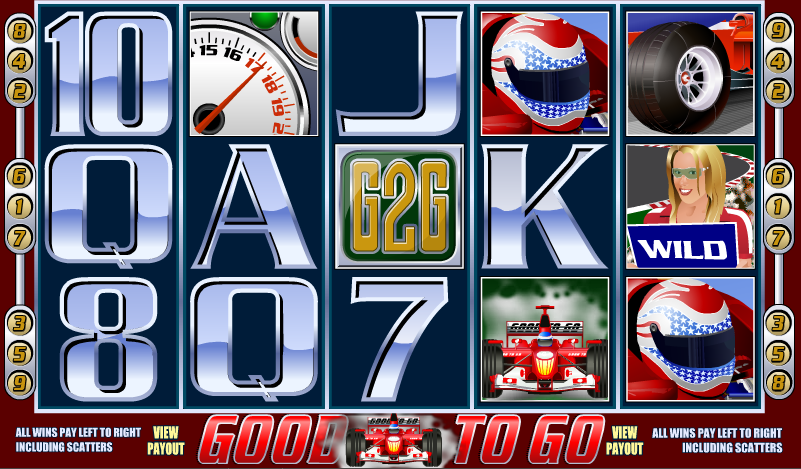 The pit girls, the burning rubber, the chequered flag and the unmatched excitement and glamour – we are obviously within the world of motor racing where high octane vehicles compete with one another at death-defying speeds. Or something like that. Good To Go is an online slot from Microgaming and if you, like us, didn’t know that the title relates to motor sport, you do now.

Good To Go is a five reel and nine payline game with no particular background as such – all the space is taken up by big symbols on the reels and the majority of those symbols are the rather mundane 7, 8, 9, 10, J, Q, K and A – the most playing card icons we’ve ever seen on a game.

More valuable symbols include a tyre, the chequered flags, a crash helmet, the G2G logo and the F1 car itself. Bonus symbols are a pit girl wild and a speedo scatter symbol which activates the feature.

There’s a fairly standard free spins round here which is triggered by landing two of more of the speedo scatters on consecutive reels. There is a little extra though which adds some entertainment.

You will receive just three spins initially and the reels with the scatter symbols will remain frozen. This means there’s a guaranteed win on every spin and if you land any more scatters the counter will reset to three spins again. Those reels will also remain frozen for the duration of the spins.

Of course the maximum number of reels which can be held is five so if you manage to land scatter symbols on each one the win will be repeated three times at the maximum prize of 50x your bet.

After each win you can opt to gamble that amount by clicking the ‘Gamble’ button underneath the reels; you now play a 50/50 game of chance where selecting the correct colour playing card will double that win. Get it wrong and you lose it all.

The feature is triggered by the scatter symbol so you can play with minimum paylines if you want; however there are only nine paylines anyway so why not select them all?

This is a very middle-of-the-road slot (if you’ll excuse the pun) but the the little bit of extra creativity within the bonus feature does mark it out as slightly better than some others. Listen carefully and you can hear some motor racing sounds in the background.