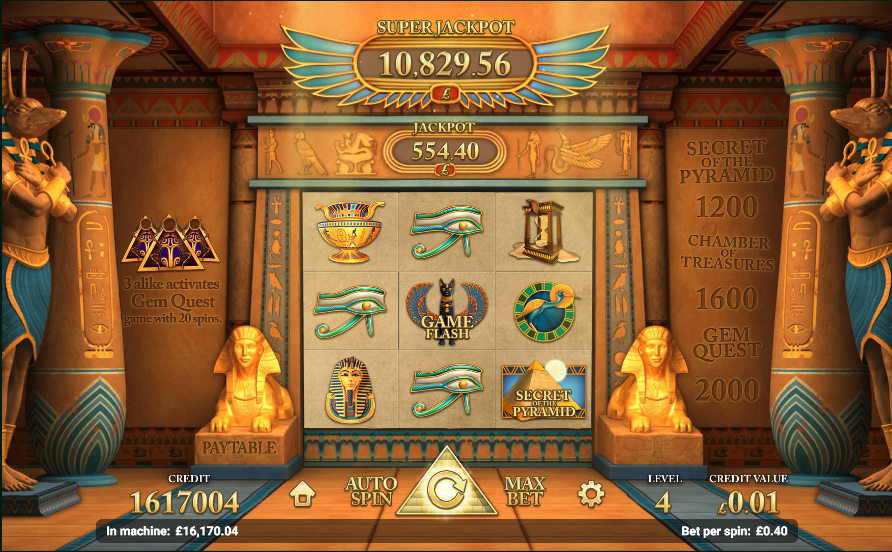 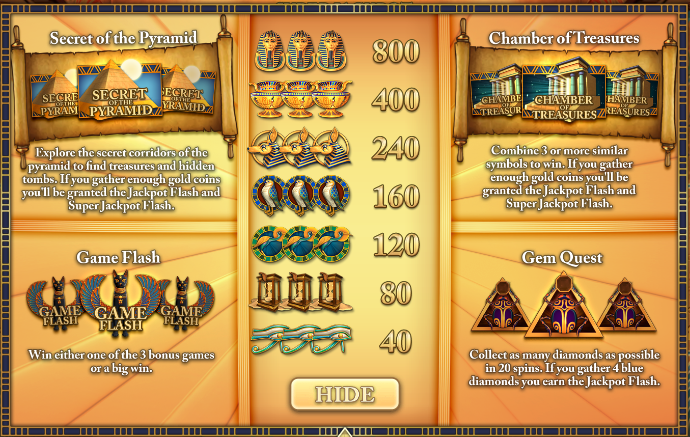 Ancient Egypt is a popular destination for online slots fans and now, in the company of Magnet Gaming, we can check out the Golden Pyramid, a feature-packed game with a progressive jackpot of which a pharaoh would be proud – check it out below.

Golden Pyramid plays out on a  3×3 grid built into the entrance of some ornate tomb with statues and hieroglyphics completing the scene; the gameplay requires you to form combos of three matching symbols in a straight line and when you do those symbols will fall away, allowing more to arrive and potentially continuing the process. Every subsequent win will attract a 5x multiplier.

The symbols are all related to the Egyptian theme and include godly representations and golden ornaments.

There’s no wild symbol in Golden Pyramid but there are four bonus icons – the pyramid, the chamber, the scarab/triangle and the Game Flash.

Secret Of The Pyramid

This is triggered by landing three of the pyramid symbols on an active payline and you’ll be taken into the tomb where you have a certain number of dice rolls and steps to collect as much good stuff as possible. Collecting 50/100 gold coins will also award the Jackpot Flash/Super Jackpot Flash prize game.

Trigger this by landing three of the scarab/triangle symbols on an active payline and you’ll receive twenty free spins; each scarab/triangle landing during these spins will display a green, red or blue gem which will increment one of the spaces on the left hand side. Completing these sections will award the shown prize or access to Jackpot Flash game.

This is triggered by landing three of the chamber symbols on an active payline; you’ll now get to play a gem-swapping game in which your task is to create winning combinations. Combos with gold coins, or making matches on the starred positions, will increment the meter to the right and award extra moves and entry to the Jackpot Flash games.

Trigger this by landing three of the Game Flash symbol on an active payline and you’ll receive a random prize which could be a cash prize or entry into one of the bonus features listed above.

Golden Pyramid, like other slots from Magnet Gaming, extends traditional gameplay to include some in-depth features which require user input and strategy; this is a very welcome thing as far as we’re concerned and this game comes highly recommended. It has an RTP of 96.50%.