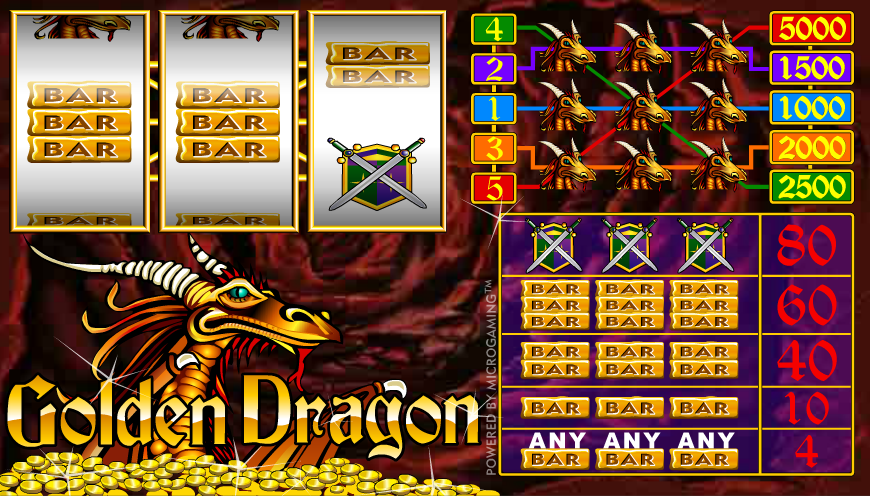 If you’re a fan of classic slots and looking for an online casino with a wide range of choices on offer then Jackpot City isn’t a bad place to start; not only does it feature Microgaming’s proprietary UK-style fruit machines but it also has a large choice of the more traditional three reel games which remain enduringly popular despite their simplicity. Golden Dragon is one such game so please read on to find out more.

Golden Dragon is a three reel slot with five paylines and of course it’s all about the giant, fire breathing monster who wiles away his days perched on a mountain of gold coins deep in a cave somewhere. We’re to just making that up – it’s all there in the background to the reels which occupy the top left hand corner of the screen space.

The paytable to the right displays all the info you are likely to need about what the various symbols are worth if you can and them in the right places. Those symbols include single/double/triple bars, crossed swords on a shield and the dragon itself.

The dragon also acts as the wild symbol which can substitute for all others; it’s worth 5000x your line stake if you can land it on payline number five which runs from bottom left to top right.

Bars can also be mixed and win you a prize but only 4x your line stake.

Kick things off by choosing your bet level which can be accomplished by using the ‘+’ and ‘-‘ buttons underneath the reels. Combine this with the choice of one to five paylines and you have a betting range of £0.25 to £25.00.

Although this is similar to Microgaming’s other three reel games from this era, it’s still worth checking out. Everything is nice and clear and the very basic sound effects add an air of casino authenticity.