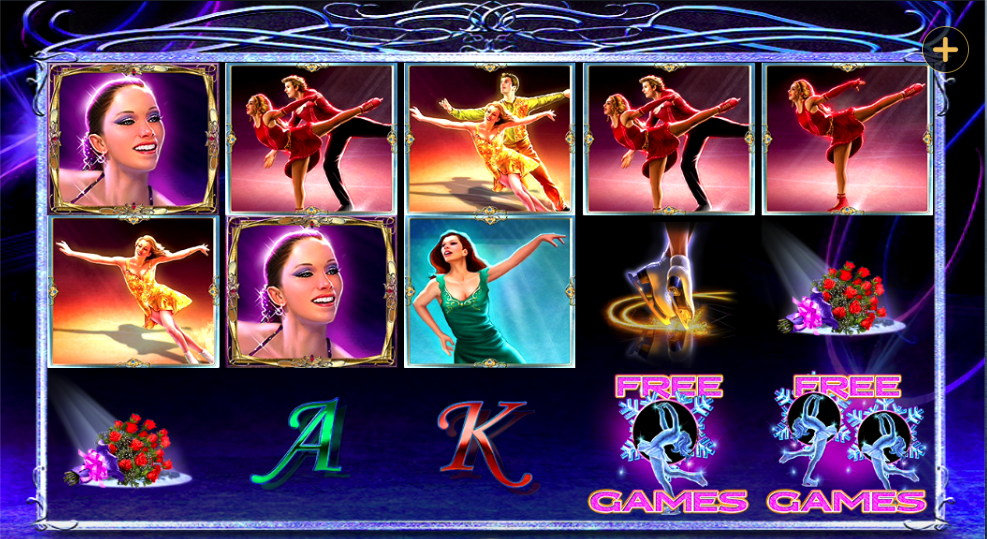 Well here’s something new – an online slot themed on ice dancing! Perhaps High 5 Games are running out of themes or maybe they’ve spotted a gap in the market with untapped potential; either way what we have here is called Glory On Ice and it tells the story of several couples dancing their way to competition success, with some free spins chucked in along the way.

Glory On Ice is a five reel slot with three rows and thirty fixed paylines; those ornate reels float above the ice against a darkened background which is presumably the arena.

The four high value symbols are the four female dancers but each also appears on a symbol with their partner and this one counts as two symbol positions, meaning it’s possible to create combos of up to ten dancers. The lower values are represented by a skate, a trophy, a bunch of flowers and Q, K, A.

The icy blue symbol is wild, it will replace all standard symbols to help form winning combos and it will expand to fill all positions on its reel when it does so; the Free Games symbol is the scatter.

Stacks of mystery symbols can land on the reels and when they do they’ll transform into any of the standard symbols, hopefully helping out with a win.

This is triggered by landing five, six, seven or eight of the Free Games scatter symbols anywhere on reels two, three, four and five for which you’ll receive 5, 7, 10 or 15 free spins respectively; the scatter can also appear as a double symbol. It’s not possible to earn any extra spins during this round.

High 5 Games have certainly produced better slots than this recently but there’s a certain quirky attraction in playing a game based on ice dancing; it’s similar to many other releases from this company so there’s not much new content here.