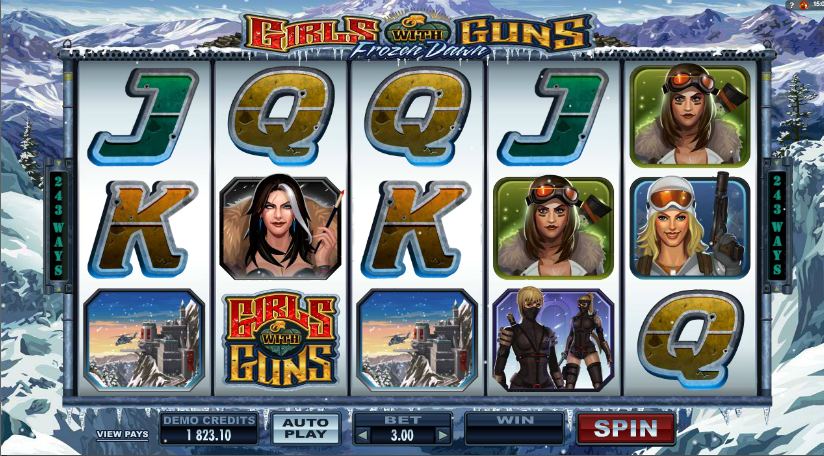 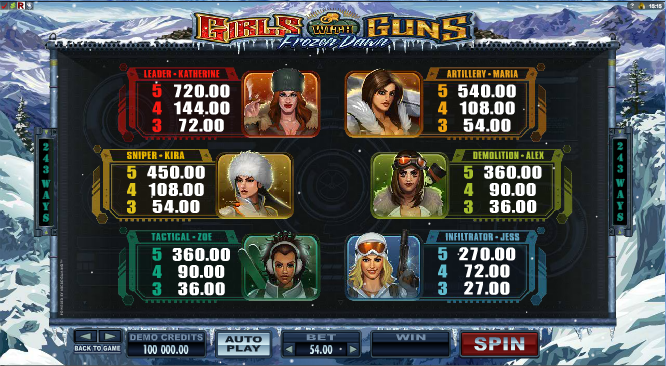 Anyone who has played the original Girls With Guns online slot from Microgaming subsidiary Quickfire will be cheered to hear that the sequel has at last arrived. It’s called Girls With Guns: Frozen Dawn and as the title might suggest it’s all a bit chilly where the ladies are now working. There are several bonus features to check out here so read on to find out more.

Girls With Guns: Frozen Dawn is a five reel slot with 243 ways to win which means that as long you have matching symbols in adjacent reels, you have a winner. The backdrop is a mountainous scene  with snowflakes drifting across the landscape.

The minor symbols are the standard 10, J, Q, K and A but it is of course the girls who make up the more valuable icons as follows:

Then we have a satellite scatter symbol, a special icy wild and a Girls With Guns wild. The special wild appears on reel there and when it does it will turn all positions wild.

This can be randomly awarded after any non-winning spin and one of the girls will be selected to fire her specific weapon at any targeted symbol. She gets one shot and each is worth different prize amount.

This is the game’s main in feature and to trigger it you will need to land three, four or five of the satellite scatter symbols anywhere on the reels. For this you will receive 12 free spins but you will also play those spins with one of the following extras:

There’s very little interactivity in this game so you can’t really influence the outcome of events at all but we would advise players to set the Autoplay for 50 spins, sit back and enjoy the show.

This is a quality sequel to the original game; it’s probably fair to say that the graphics aren’t a huge improvement on the first one but plenty of thought has gone into the bonus features and this is a game you will want to return to.