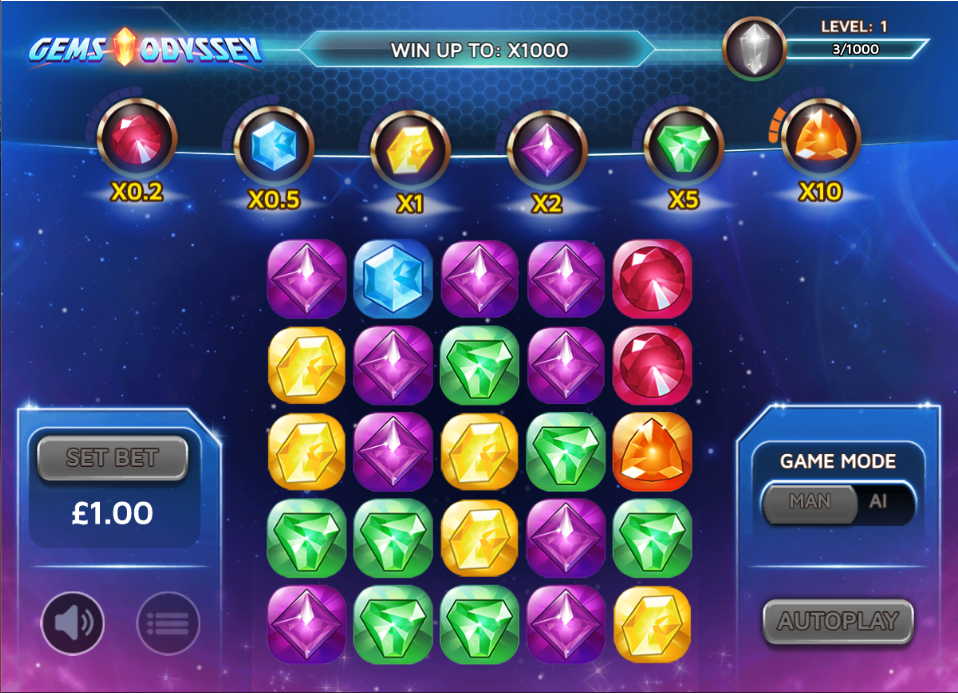 Gem matching games are a particular speciality of Skillzzgaming and we’ve been playing a fair bit of Fruit Blast recently, a slot in which your task is to collect clusters of three or more game to win cash; Gems Odyssey plays out along the same lines but it adds Nebula Stones to the jackpot and Second Chance features.

Gems Odyssey is played on a 5×5 grid and the basic gameplay is simple – click on groups of three or more matching gems connected horizontally and vertically. Each collected gem will increment one of the meters above the reels which, when full, award multipliers of your stake.

There are gems in various colours and shapes including red, blue, yellow, purple, green and orange; there are also the various Nebula Stones and jackpot symbols but more of that shortly.

You can manually click the clusters or use the AI button to allow the game to pick them for you.

The Nebula Stones are collected in the same manner as the gems but they’re stored away until you’ve levelled up – levelling up is just a case of collecting points with each cluster until you’ve reached a certain amount. There are four types of Nebula Stone with varying rewards:

On any non-winning spin you may be offered a Second Chance, essentially a free spin to try and win some money.

Matching and collecting a cluster of jackpot symbols will award 1000x your total stake.

Gems Odyssey is another slot which combines some enjoyable gameplay with the ability to select the clusters to collect and perhaps influence the outcome of the next gem fall; like Fruit Blast it’s a lot of fun and definitely worth some spins which will cost between £0.50 and £50.00 per go.