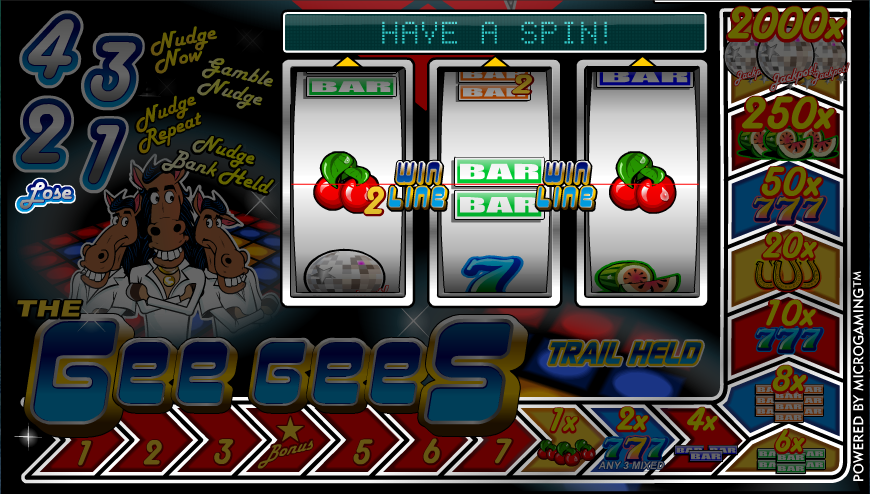 We don’t make a secret of liking Microgaming’s range of fruit machine-style online slots and now we have one more to add to the list; the subject of Gee Gees is an interesting one – it combines horses with the legendary Bee Gees to give us a sort of equine disco theme.

Gee Gees is a classic three reel slot with just a single payline; to the left of the reels are our three disco champions and the symbols are a combination of traditional cherries, sevens and bars plus horseshoes and glitter balls.

These games are all about the bonus features and in this case it’s reached by completing the number trail or landing a winning combination. You can see from the screenshot above that the number trail turns into a payline trail.

The number trail is completed by landing symbols on the payline which have small numbers attached; these numbers are totalled and contribute to movement up the ladder. Once you reach at least the cherries in position eight you have triggered the feature and the screen will display the game.

You can now see from the video below that you’re inside some sort of disco and ready to play a board game. Just click spin to roll the dice and you will move around the board, collecting extra nudges, feature and cash as you go. The question mark is a space you don’t want to land on so when you are happy with your prize just collect it and go back to the main game.

Familiar to UK players, nudges are randomly awarded and allow the player the chance to jog the reels down in an attempt to make winning combos or collect numbers. They may also be gambled, repeated or banked for one more spin.

Similarly, holds are randomly handed out and let the player freeze reels to achieve the same objective.

Use the nudges and holds strategically to collect the required numbers to trigger the feature. The fourth step on the trail is a bonus space which will help you on your way so sometimes it’s better to stop on that space rather than collecting numbers which will take you one or two spaces further on.

These fruit machine-style slots may be similar to each other but they are good fun nonetheless and this is another winner. The feature is easy to trigger and the theme is as amusing one.