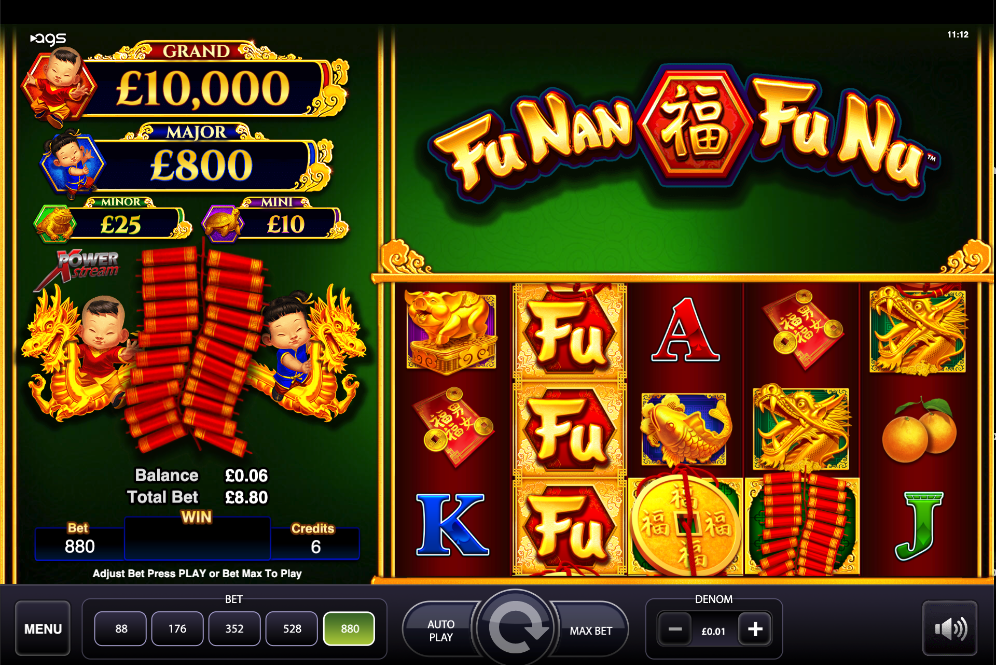 There’s a touch of oriental luxury about this online slot machine from AGS and it arrives on our screen dripping with gold and firecrackers; it’s called Fu Nan Fu Nu which translates as Lucky Boy Lucky Girl and it offers players jackpot prizes, free spins and the PowerXStream payline structure.

Fu Nan Fu Nu is a five reel slot with three rows and the PowerXStream reel setup – this means that winning combos are formed as long as there are matching symbols on adjacent reels starting from the left hand side. To the left of the reels the various jackpot prizes await the luckier players.

The high value symbols include various golden items such as fish, dragons and pigs along with fans, money envelopes and oranges; J, Q, K and A are the lower values.

The firecrackers are wild, they appear on reels two, three and four and they’ll substitute for all other symbols to help form winning combos; the gold coin is the bonus symbol.

This is triggered by landing at least three of the golden coin bonus symbols in a winning combination; you’ll now get to choose between the following three free spins modes:

It’s also possible to retrigger this round with another combo of three gold coins.

There’s a chance that this round may be triggered each time a wild symbol lands in view; you’ll now get to play a picking game to find three matching symbols from the twelve on offer  and this will determine which of the jackpot prizes you’ve won – Grand, Major, Minor or Mini.

Fu Nan Fu Nu is a slot which oozes oriental class with its golden graphics and Chinese soundtrack; the two bonus features differ slightly from the norm and the jackpot prize is always welcome.