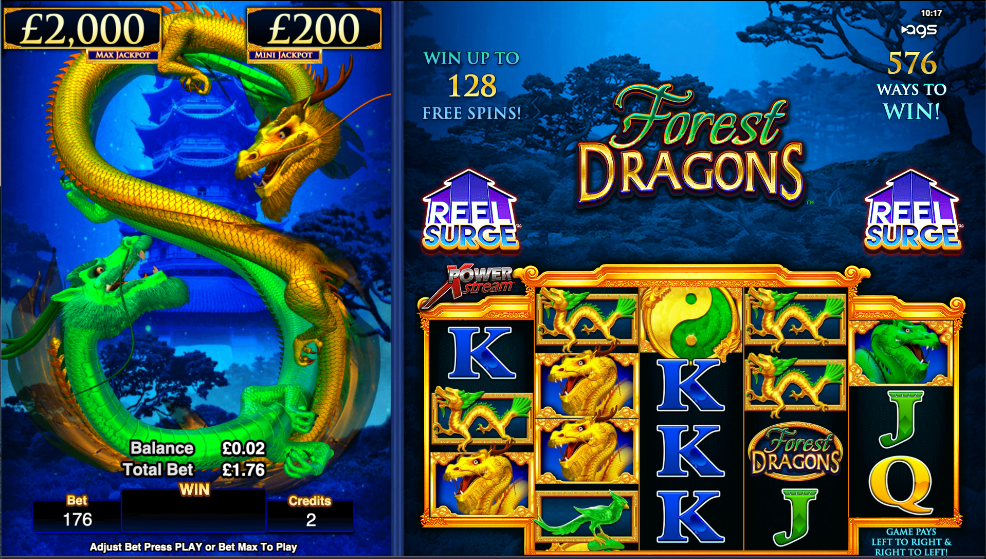 Dragons are always an enjoyable addition to any online slot machine and here we have some ultra-stylish examples in this release from American Gaming Systems; it’s called Forest Dragons and it offers players jackpot prizes, plenty of free spins and the popular Reel Surge,

Forest Dragons is a five reel slot with variable rows and a potential 576 ways to win; we like the split screen display which shows the golden reels on the right hand side with the intertwined greeb and gold dragons floating in front a temple to the left.

The higher value symbols are made up the games’ logo, dragons in various poses while the lower values are the standard J, Q, K and A. Wins can be formed from right to left as well as left to right with AGS’ PowerXStream reel setup.

The wild is a golden ‘Wild’ which appears only on reels two, three and four and it will replace all standard symbols to help form winning matches; the gold and green Yin Yang symbol is the bonus.

Landing awinning combo of Yin Yang bonus symbols on reels two, three and four will award eight spins multiplied by the number of bonus symbols per reel up to a maximum of one hundred and twenty eight; more spins can be won during this round in the same manner.

This is triggered when bonus symbols land on reels two and three in the free spins – the centre three reels will now expand upwards to a maximum of eight rows and a potential 576 ways to win. This lasts until the end of the free spins.

The jackpots shown on the left hand side can be won randomly afetr any base game spin.

Forest Dragons is a really high quality slot in terms of graphics and animations – it all adds to the clever features to create an interesting and and enjoyable slots experience.