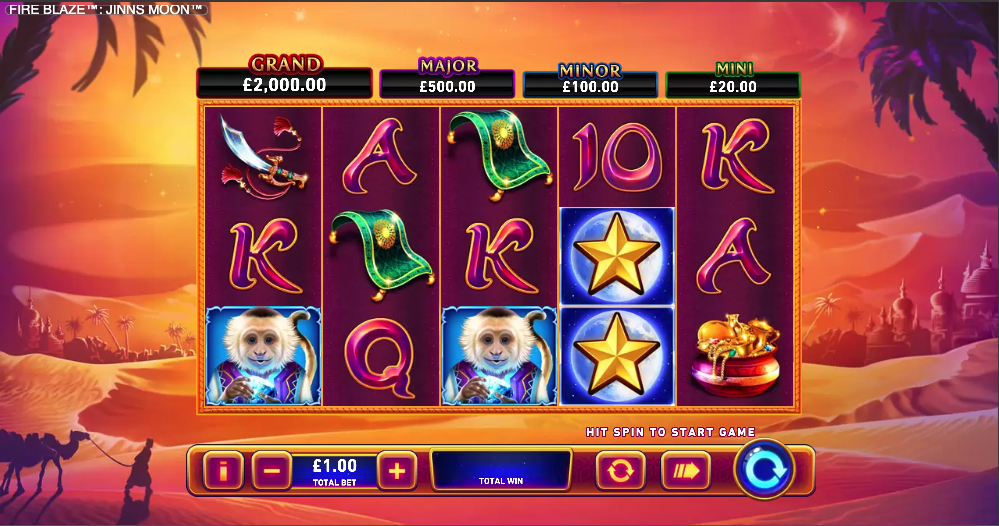 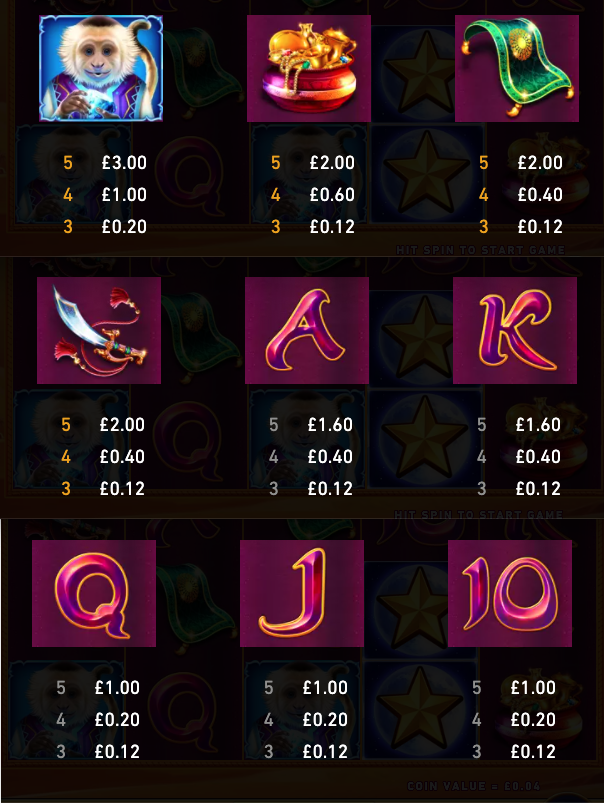 As the sun sets over the towering dunes of the Arabian peninsula it’s slowly replaced by the moonlight which illuminates the spires on the minarets and the fronds on the palm trees; the scene is now set for Fire Blaze: Jinn’s Moon, an online slot developed by Playtech/Rarestone Gaming which tempts players with free spins and the Fire Blaze jackpot round.

Fire Blaze: Jinn’s Moon is a five reel slot with three rows and fifty fixed paylines; those reel spins within a frame which hovers in front of the scene already described in the previous paragraph but we’ll add that the four Fire Blaze jackpot prizes are displayed at the top of the screen.

Theme-related symbols include the monkey, the bowl of gold and jewels, the magic carpet and the dagger; 10, J, Q, K and A make up the lower values. The genie is wild and she appears only on reels two to five while the magic lamp and the moon are the scatter symbols.

Trigger this feature by landing between six and fifteen moons anywhere in view and you’ll receive three initial spins while those symbols are held in place; each time another moon lands the spins will be reset to three again and this continues until all positions are moons or there are three consecutive, non-winning spins. Each moon will display a cash value of up to 50x the bet or a star which will transform into the Mini, Minor or Major jackpot values at this point.

You’ll now be awarded the sum of all those symbols but if you can fill the reels completely with moons then the Grand jackpot of 2000x the stake will be yours.

Landing at least three of the magic lamp scatter symbols anywhere in view will award an initial eight free spins but these can be retriggered in the same way; during this round blank positions may appear on the reels which will be filled with a randomly selected symbol which may help out with a win.

Fire Blaze: Jinn’s Moon sticks to the same template as Fire Blaze: Adventure Trail in it’s gameplay but that’s Ok because it’s good fun anyway and there are some small differences in the bonus offerings. This slot can be played with stakes ranging from £0.25 to £100.00 per spin.