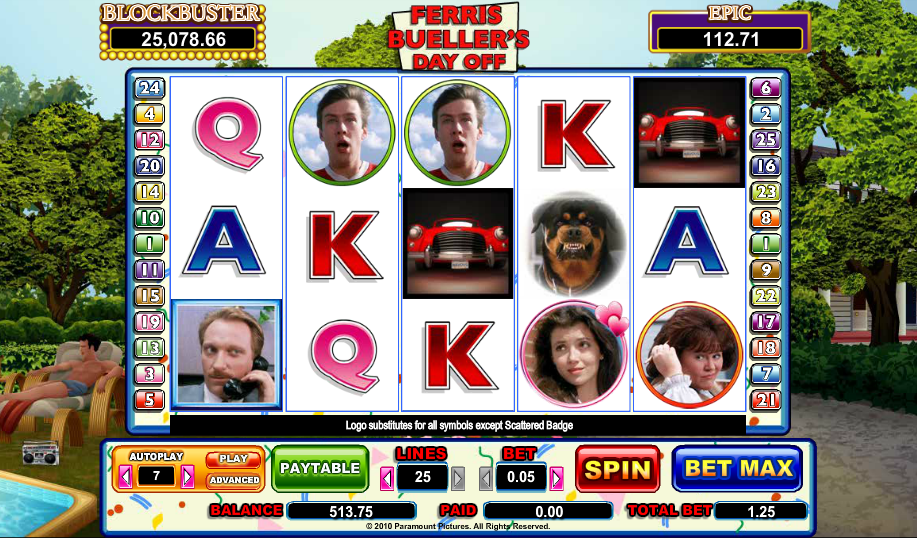 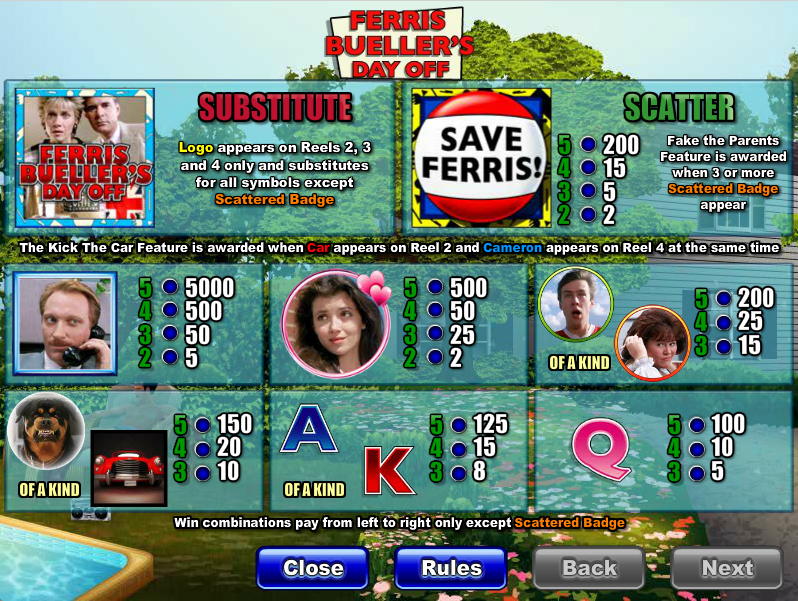 Ferris Bueller’s Day Off is the classic 1986 movie featuring Matthew Broderick as the skiving pupil who embarks on the greatest day off ever with his friend Cameron and girlfriend Sloane, pursued relentlessly by the hapless school principal. It sounds like a great theme for an online slot and it certainly looks the business with two bonus features and a progressive jackpot. It was originally developed by Cryptologic, now part of Amaya Gaming.

Ferris Bueller’s Day Off is a five reel slot with three rows and up to twenty five paylines; those reels spin against a backdrop of Ferris relaxing by his parents pool in this vision of American suburbia.

The high value symbols are thankfully related to the theme and include the school principal, Sloane, Cameron, the school secretary, Ferris’ big dog and Cameron’s father’s Ferrari. Q, K and A are the lower values.

The game’s logo is wild, appears only on reels two, three and four and substitutes for all others except the scatter which is represented by the Save Ferris badge. Any winning combo including a wild is multiplied by 2x.

This is a recreation of Cameron’s final meltdown in the movie and it’s triggered by landing the Ferrari on reel two and Cameron on reel four. You will now see Cameron kicking the car and each time he does so the revs increase, along with the prize. When he’s finished kicking, the round is over.

This is triggered by landing three or more of the Save Ferris scatter symbols anywhere in view and to determine the number of spins you will be asked to press the keys on Ferris’ synthesizer (coughing sounds, etc). Each reveals free spins or multipliers.

You will notice the various progressive jackpot totals above the reels – Blockbuster, Smash, Classic, Epic and Acclaimed and these are all won at random, although the bigger your bet, the greater the chance of nabbing one.

This slot is a very faithful recreation of an excellent 80s movie and it’s features and appearance are closely ties to the theme. It’s very enjoyable if a little dated now and well worth checking out.