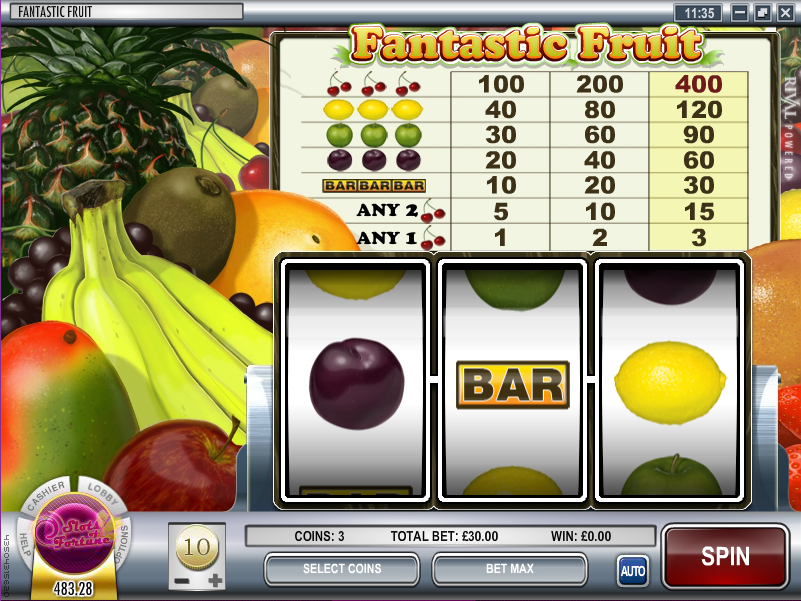 We’ve been playing plenty of Rival Gaming releases recently and it’s been refreshing to discover that they have a large range of engaging classic slots to get to grips with. These three reel online slots probably aren’t for everyone, lacking as they do any added bonus features such as free spins and expanding, but they offer an attraction all of their own with simple gameplay and lots of uninterrupted spins of those reels. Read to find out more about Fantastic Fruit and where to play it.

Fantastic Fruit has three reels and just the single payline and the theme is of course fruit; the big, clear reels occupy a  space to the right of the screen but there’s a huge bunch of fruit acting as the background. It’s all very tropical as well with bananas, kiwi fruits and mangoes. The paytable occupies the space above the reels.

The fruity symbols on the reels are a little less exotic and there are only four – cherries, apples, lemons and plums; the extra symbol is single bar.

Cherries are the most valuable symbol and worth up to 400x your stake for three on the payline but they will also pay out for one or two anywhere on the payline.

Like all classic slots it’s pretty simple; the first thing is to decide your wager level and this is done by using the ‘+’ and ‘-‘ symbols underneath the coin below the reels. You can now double or triple this amount by choosing a coin level of one, two or three with the ‘Select Coins’ button. Alternatively just use the ‘Bet Max’ button.

Increasing the coin level will increase the prizes proportionately as you can see from the paytable but it’s worth pointing out that  landing three cherries with three coins pays double the prize for two coins so there’s an extra incentive for using maximum coins.

This is another solid three reel slot from Rival and we particularly like the way the fruit on the reels are photographs rather than graphics. It’s always nice to see a picture of a plum…