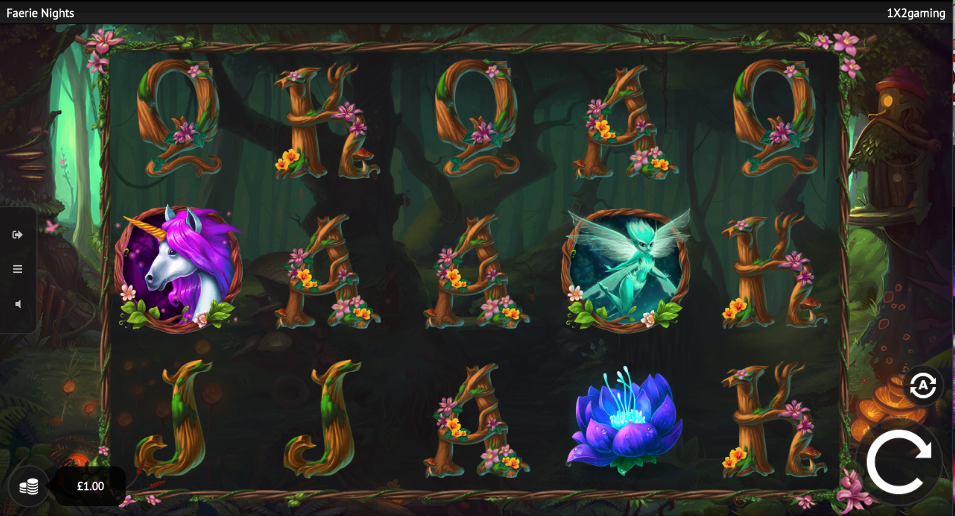 Our fantasy friends from the forest form the alliterative theme of this online slot machine from 1×2 Gaming; it’s called Faerie Nights and its’ gloomy groves offer players expanded wilds in the base game and sticky wilds in the free spins round.

Faerie Nights is a five reel slot with three rows and twenty five fixed paylines; those transparent reels spin within entwined branches and through them we can see the hazy, green forest interior, home to the creatures of our imagination.

The higher value symbols include a purple-haired unicorn, a blue fairy, a gnome, a butterfly, a blue flower and a pink toadstool; J, Q, K and A formed from gnarled branches make up the lower values.

In the base game the wild is a tree which will expand to cover all positions on its reel when it appears; it will replace all standard symbols to help form winning combos. The fairy in the red dress is the scatter symbol.

This is triggered by landing three, four or five of the red-clad fairies anywhere in view for which you will receive 7, 9 or 11 free spins respectively; the time of day now changes to night (it was only quite gloomy before) and the following two symbols now appear to help you out:

Faerie Nights is a really atmospheric slot with some charming music and sound effects and a clever assortment of bonus features in the base game and the free spins; 1×2 Gaming have always produced very playable games and this is no exception.