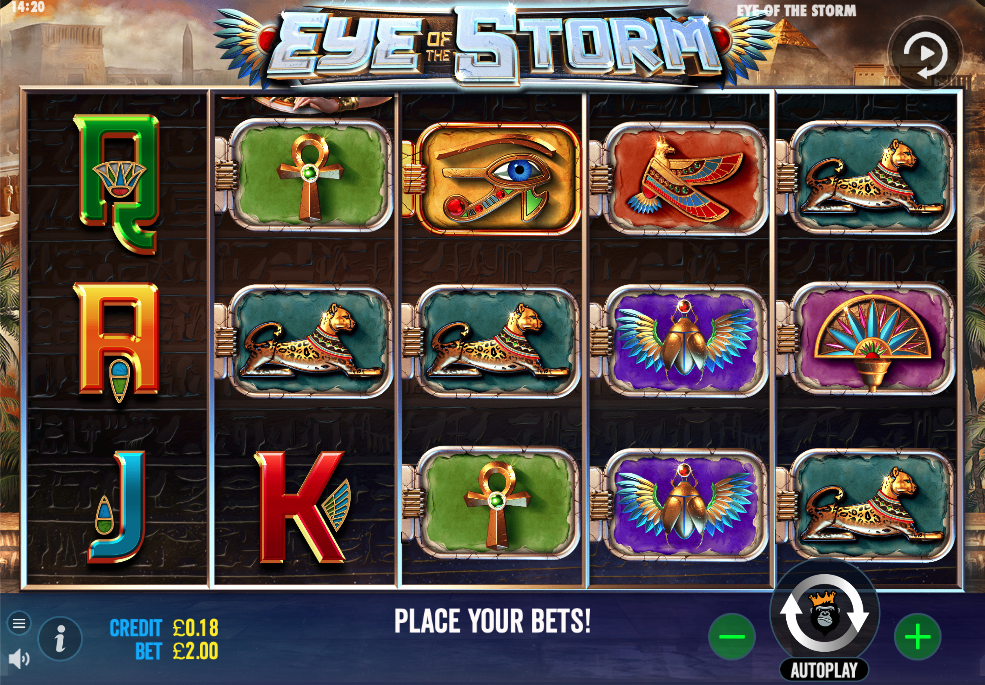 Some unnamed queen of Ancient Egypt is the main character in this online themed on the heat and hieroglyphics of North Africa; it’s called Eye of the Storm, it’s developed by Pragmatic Play and it comes with a levelling up feature in the free spins bonus which has the potential for some big wins.

Eye of the Storm is a five reel slot with three rows and ten fixed paylines; hieroglyph covered columns flank those reels which sit against a backdrop featuring an Egyptian city with pyramids visible in the distance.

Deific symbols such as the Eye of Ra, Osiris and a golden ankh make-up the higher values while J, Q, K and A represent the lower values; the queen is wild, she appears on reels two, three and four and she’ll expand to fill the whole reel if a win is possible by doing so. The glowing pyramid is the scatter symbol.

Eye Of The Storm Bonus Features

Landing at least three of the pyramid scatter symbols anywhere in view will award an initial twelve free spins; look out for any wild symbols landing on the reels because one, two or three on the same spin will increase the level by one, two or three steps respectively and add an extra one, three or five extra spins also.

The levels involve the six higher value symbols because for each level increase the lowest value one will be upgraded to the next one up; landing multiple wilds will hasten this upgrading. Landing three or more scatters will award twelve more free spins.

Eye of the Storm is all about the levelling up feature within the free spins and it’s safe to say that the big wins are all waiting there also; it’s a nice addition to the massed range of Egyptian-themed slots and comes with a refreshingly high RTP of 96.71%.