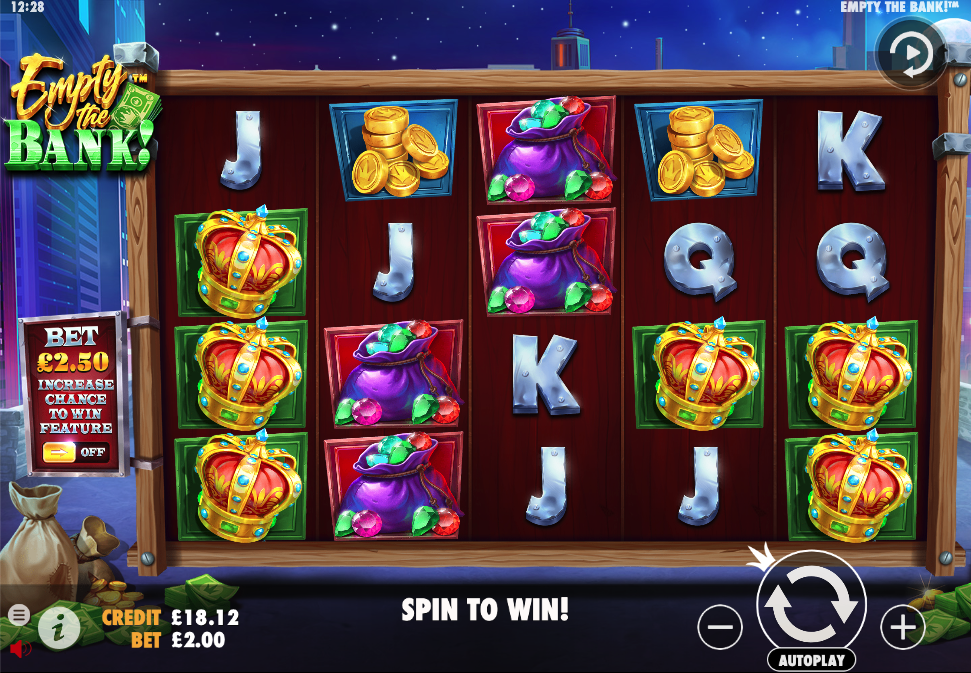 It may well be true that crime sometimes pays but if you’d like to dabble in a bit of virtual wrongdoing with no chance of getting punished then why not try out Empty The Bank!, this online slot from Pragmatic Play; spin the reels from £0.20 for the chance to win respins and a loot bag-full of random modifiers.

Empty The Bank! is a five reel slot with four rows and twenty five fixed paylines; satchels of coins and banknotes litter the foreground while twinkling skyscrapers and a bright full moon complete the scene.

The high value symbols are all stolen items such as crowns, bags of jewels, gold bars, piles of banknotes and gold coins; J, Q, K and A make up the lower values. The burglar is wild and the safes are the special symbols.

Landing three of the safe symbols anywhere in view will activate this feature and you’ll start with three respins on a 4×5 reel set similar to that shown below; any money symbols with multipliers attached landing will lock in place and reset the number of respins to three again but there are lots of other symbols which can land and lock also:

If you’re not patient enough to wait for three safes to trigger the feature you can buy straight in for 80x your stake; you can also use the Ante bet to increase your chances of triggering the main feature for 125% the stake.

Empty The Bank! is one of the better crime-themed slots we’ve tried but it’s fair to say that all the excitement is in the respins round Does it pay to buy straight into the feature? You’ll have to decide for yourself but overall this is entertaining stuff.

Empty The Bank! is a crime-themed video slot from Pragmatic Play with five reels and twenty paylines.

The Return To Player percentage for Empty The Bank! is 96.48%.

How To Win On Empty The Bank!?

Where can I play Empty The Bank!?