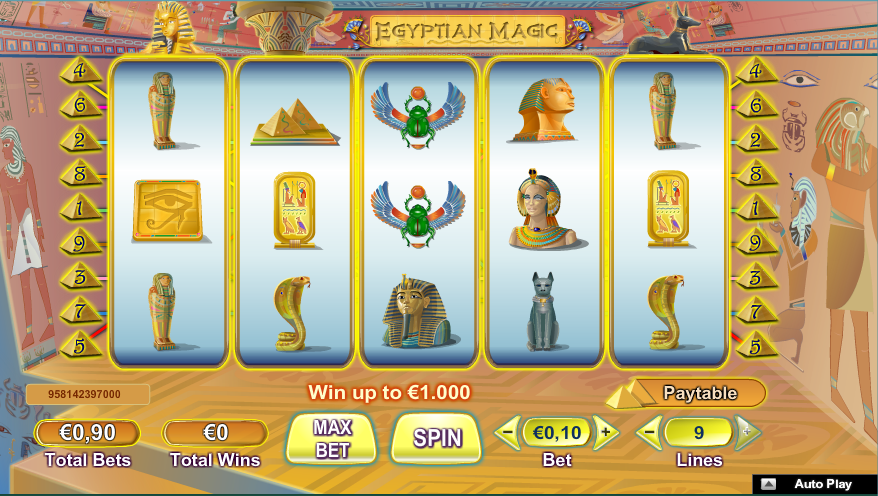 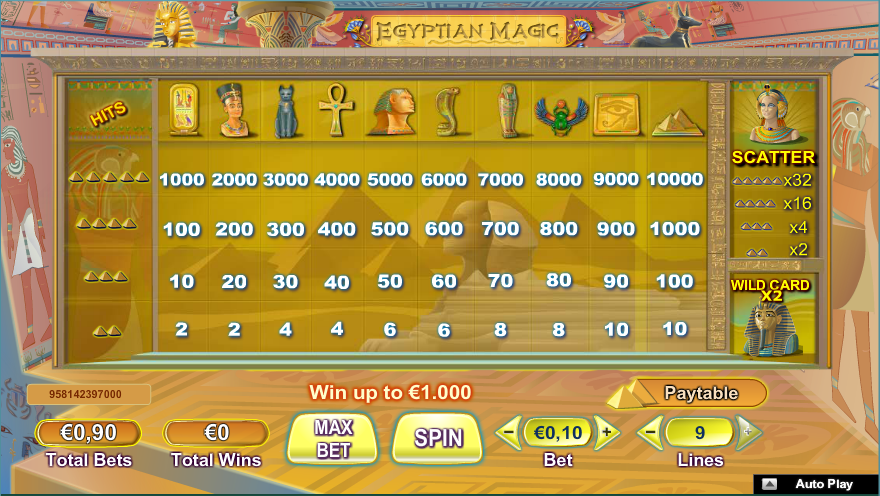 A virtual trip to the land of pyramids and sand is not an unknown occurrence for fans of online slot machines and here we have the opportunity to make one more journey in the company of Egyptian Magic, a tidy release from NeoGames with some clean looks but feature-free gameplay – read all about it below.

Egyptian Magic is a five reel slot with three rows and up to nine paylines; each reel spins in it’s own gold frame while on either side the paylines are marked out on tiny individual pyramids. The backdrop to the reels is an oddly-angled wall covered with various Egyptian hieroglyphics and there’s a drum-based soundtrack which complements the gameplay pretty well but can of course be switched off if necessary.

All ten of the symbols are theme-related and include a tablet covered with hieroglyphics, the head of Cleopatra, the cat god Bastet, a golden ankh, the Sphinx’s head, a cobra, a sarcophagus, a scarab beetle, a motif of the Eye of Ra and two of the pyramids. The pyramids are the most valuable and worth 10000x your line stake for five on an active payline.

The sphinx is the wild symbol and it will substitute for all others to help form winning combinations except for the Pharaoh scatter icon.

As we’ve already mentioned there are no bonus features in Egyptian Magic so all you have to do is spin the reels and hope that the symbols line up in the most profitable way possible; just select your line bet, your number of paylines and away you go.

Egyptian Magic is a nice-looking and perfectly playable slot if you have no interest in extra features; if you do you will be better off checking out any of the multitude of Egyptian-themed games already available.