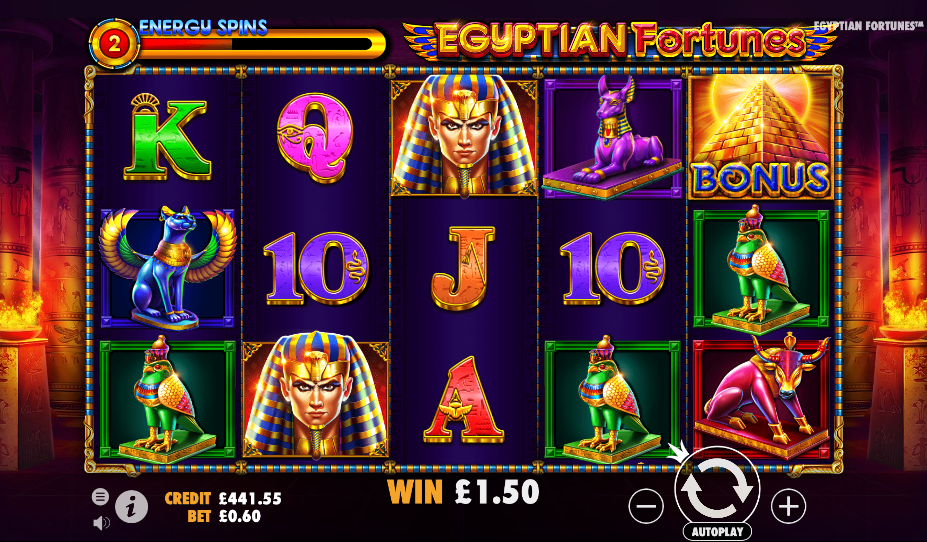 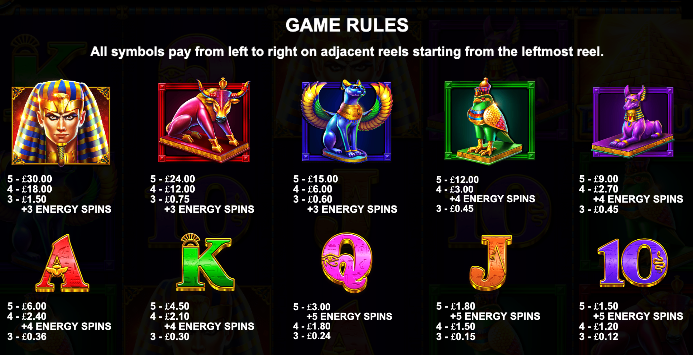 Hieroglyphs on flame-lit columns tell us that were back in Ancient Egypt to try out an online slot machine themed on the gods and rulers of this once-great civilisation; called Egyptian Fortunes, it’s developed by Pragmatic Play and it comes not only with free spins but also with ‘Energy Spins’.

Egyptian Fortunes is a five reel slot with three rows and twenty fixed paylines; there’s a dramatic soundtrack to accompany your gameplay which takes place on ornate, delicate reels against a backdrop of the temple interior.

The higher value symbols include the pharaoh’s mask and representations of various Egyptian gods such as Apis, Bastet and Anubis; 10, J, Q, K and A make up the lower values.

The wild is a pair of golden asps and it will replace all other standard symbols to help form winning combos; the bonus symbol is golden pyramid.

These are a nice touch and are awarded if you can land certain winning combinations; for example four Aces will award four Energy Spins which are effectively instant free spins. You can see what’s available to win and how to obtain it by looking at the paytable.

This is triggered by landing three of the golden pyramid bonus symbols anywhere on reels one, three and five; you’ll only get six free spins but the reels will only contain three randomly selected symbols plus the wild, which appears on reels two and four. There’s no bonus symbol in this round so it’s not possible to trigger any more spins; also Energy Spins cannot be won during this feature.

Egyptian Fortunes is a slot which takes a fairly standard theme and livens it up with the addition of the inventive Energy Spins and an enhanced free spins round – worth stopping by for!