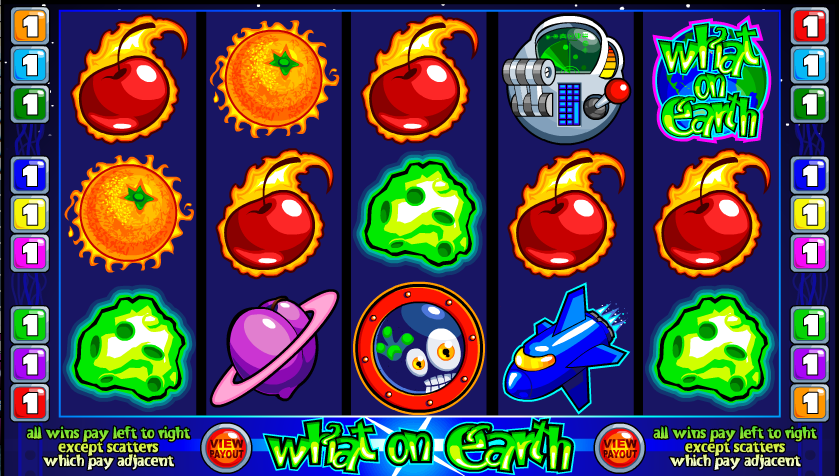 The freezing depths of space await those brave enough to check out this cosmic online slot from Microgaming. What On Earth takes us on a journey far beyond the confines of planet earth and offers us the chance to win money in a colourful game with several bonus features.

What On Earth plays out over five reels and just nine paylines and this is one of Microgaming’s big and bold releases in which the large reels and symbols dil up all the available screen space with just the merest glimpse of stars in the background.

All the symbols are theme-related and nicely though out; there’s a cherry comet, a sun orange, plums as Saturn and a melon planet. There’s also a green meteor, a spaceship’s console and an alien face in a porthole.

The What On Earth logo is t wild and only substitutes for the console and the porthole; there are also red, green and blue spaceship scatter symbols which activate the features.

The three features aloo stem from this mini-game and to trigger it you need to land at least three of the coloured spaceships on consecutive reels. The green and blue ones only appear on reels three, four and five but the red one is on all reels.

You will now see five aliens hovering in their spaceships and all you need to does click one to reveal a prize multiplier of between 3x and 200x. However you may also uncover a Globe, which starts the Destination Bonus, or the Contest symbol which starts the Beam ’em Up game.

Finding the globe will allow you to pick another destination at which to try your luck again – here the maximum win is a multiplier of 400x.

The Contest symbols will change the game into one in which you must pick an alien to compete in a competition to try and beam up as many earthlings as possible before the timer runs out. The more he manages, the higher the multiplier value up to 200x.

This is an engaging enough slot with some appropriately extra-terrestrial sound effects and a number of extra features. It’s a little dated now but still good fun.