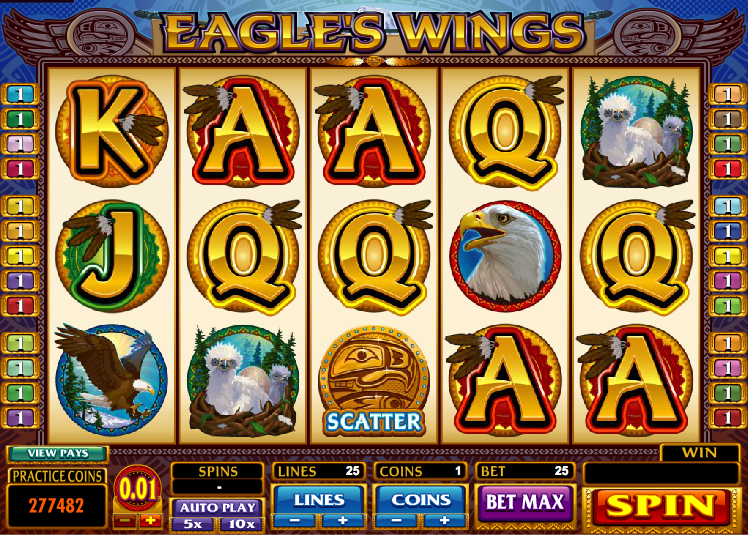 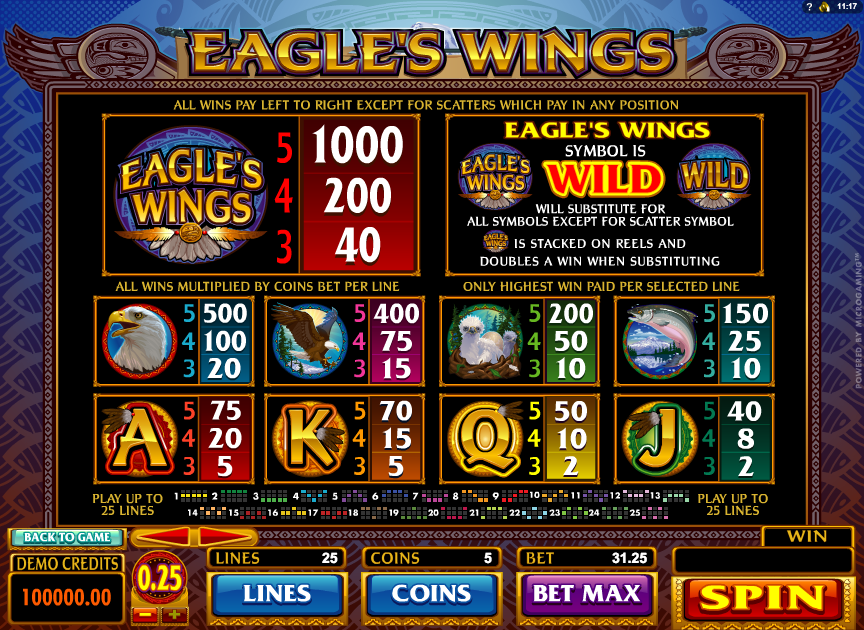 The eagle is a noble creature and clearly deserving of an online slot machine based on it’s habits; Eagle’s Wings is the first eagle-themed slot we’ve come across and it’s from Microgaming.  It’s also part of a bigger genre of animal themed slots of which we’ve seen plenty in the past.

Eagle’s Wings is a colourful slot which features five reels and a pretty standard twenty five paylines; the reels are set against an ornate background with a snow-capped mountain in the centre.  The Bald Eagle is the focus of this slot and this bird features in two of the symbols; there’s also an eaglet and a leaping fish which is presumable lunch for our eagle family. Playing card icons make up the lower value symbols.

The Eagle’s Wings logo is wild and there’s an eagle coin scatter symbols which activates the bonus feature.

During the base game the wild symbol is stacked, meaning that they appear on top of each other.  This gives the player more chances of creating winning combination.  Additionally any win which includes the wild will be doubled.

This is the main feature and you can earn it by landing three or more of the coin scatter symbols anywhere on the reels. You will see a number of coins and the number you get to pick is determined by the number of coins you landed to begin with.

Each coin will reveal a certain number of free spins and it’s possible to collect up to sixty.  All wins are multiplied by 3x so there’s a potential big win here.  It’s also possible to re-trigger the spins by landing more coins.

Play with maximum paylines if you’d like to favour the stacked symbols in the base game; if you’re just going for the feature then you can reduce the paylines and save some money as the scatters will be active anyhow.

This is a reasonably basic slot but it adds to a growing list of animal-themed slots and contains some high quality graphics and animations, especially when you land a winning combo.