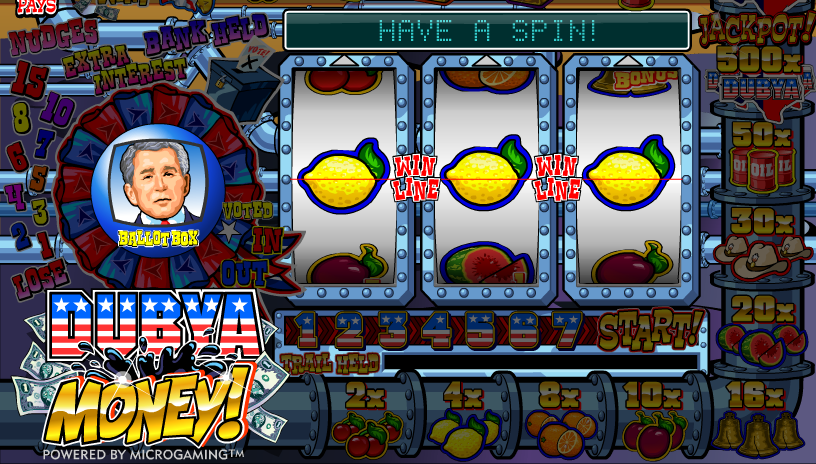 It’s not very often that satire creeps into the design process for an online slot machine but we’re pleased to see it makes an occasional appearance. Dubya Money is a Microgaming releases dedicated to the somewhat divisive character of George W. Bush Jr, US president and apparent close friend of big business – something that’s made clear in this game.

Dubya Money is a three reel, single payline fruit machine-style slot all about voting, money and oil. There are numerous small features in the base game as well as a main bonus game.

The symbols are mostly a traditional collection of cherries, lemons and the like but there are some-theme specific icons higher up the ladder including a Stetson hat, drums of oil and the Dubya logo in red, white blue.

You will then be taken to the feature screen displaying several sets of reels; stop the flashing light on one of the features to win that particular prize. The reels here only come into play if you land on the Dubya Money feature.

Generally the features all involve spinning guaranteed wins back in the base game although the Dubya Money game is a little different – all three reels will spin automatically and will keep spinning until they fail to land a win.

When you land a win in the base game you have chance to repeat it if the rosetta to the left lands on a blue ‘In’ space.

Nudges are randomly handed out and let the player jog down reels to try and make winning combos or collect trail numbers; they can also sometimes be repeated, gambled or banked for one spin.

Holds let the player freeze reels and these are particularly useful when collecting trail numbers.

This is a randomly awarded bonus and will just repeat your most recent win. It’s good news.

There are loads of features here but if you’re trying to reach the Oil Fields game then use the nudges and holds strategically to collect the numbers.

If you end up picking the Nudge Mania, it’s always worth gambling those nudges because they’re quite easy to win, especially at lower levels.

This is a great game with a humourous and satirical side – there are lots of little extra things you notice when you’ve been playing for a while so it’s worth spending some time on.