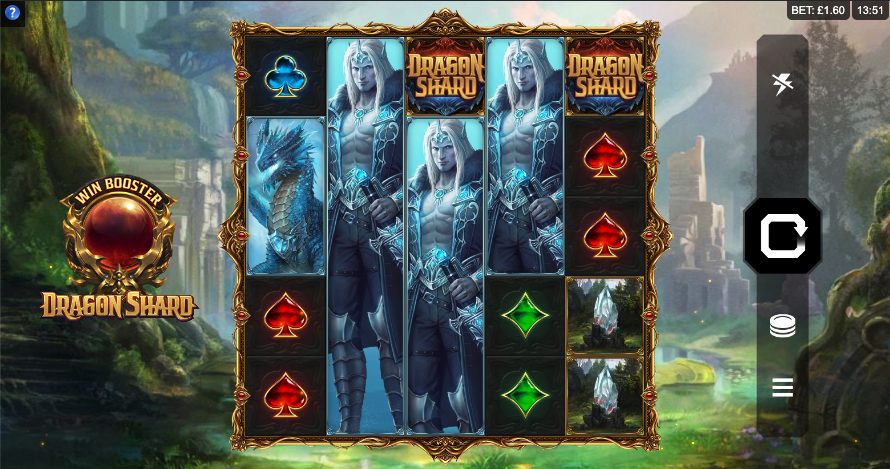 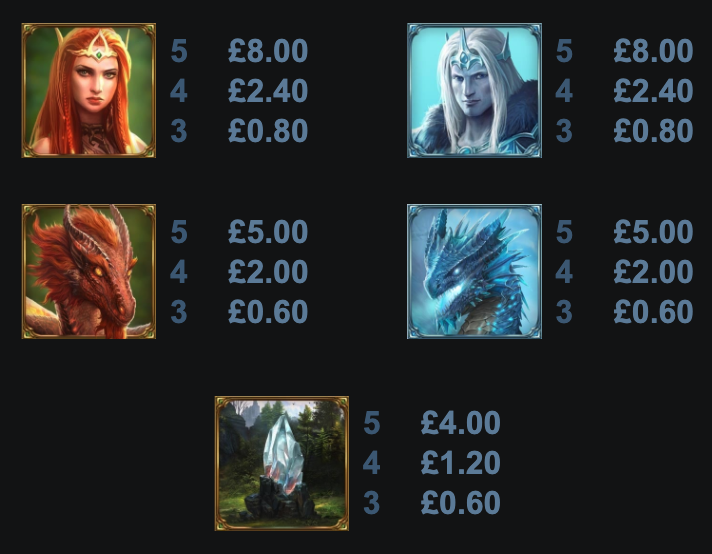 Fantasy realms always look like enticing places to live but there’s generally a drawback – in this case it’s the existence of giant dragons; these fire-breathing creatures are the theme of Dragon Shard, an online slot from Microgaming/Stormcraft Studios featuring mystery symbols, free spins and the chance to increase your stake for some extra goodies.

Dragon Shard is a five reel slot with five rows and forty fixed paylines; the symbols spin within one of the most elaborate and ornate frames we’ve ever seen  while the backdrop displays a green land of valleys, hills, rivers and amazing structures.

The high value symbols are represented by the Fire Queen, the Ice King (both can appear stacked), the fire dragon, the ice dragon and crystal relic; playing card symbols in red, orange, green and blue make up the lower values.

The Dragon Shard logo is wild and will replace all standard symbols to help form winning combos; the dragon’s eye is the scatter which activates the main feature.

On any spin you may see a stack of Mystery Symbols which will transform into matching wilds or standard symbols when the reels stop spinning.

Clicking the Win Booster button to the left of the reels will double your stake but also give you the following extra features:

This is triggered by landing three of the dragon’s eye scatter symbols anywhere in view and you’ll receive an initial ten free spins with one extra awarded for each scatter landing during this round.

If you triggered the spins with three, four or five scatter symbols you’ll play it with one, two or three Mystery Reels respectively – a Mystery Reel will contain only Mystery Symbols as described above.

The first thing to say is that Dragon Shard looks amazing – almost as if the reels have been superimposed on a piece of art; the features are well thought out also with the Mystery Symbols crossing over into the free spins and the opportunity to pay a bit extra for more chances to win. Don’t miss this!