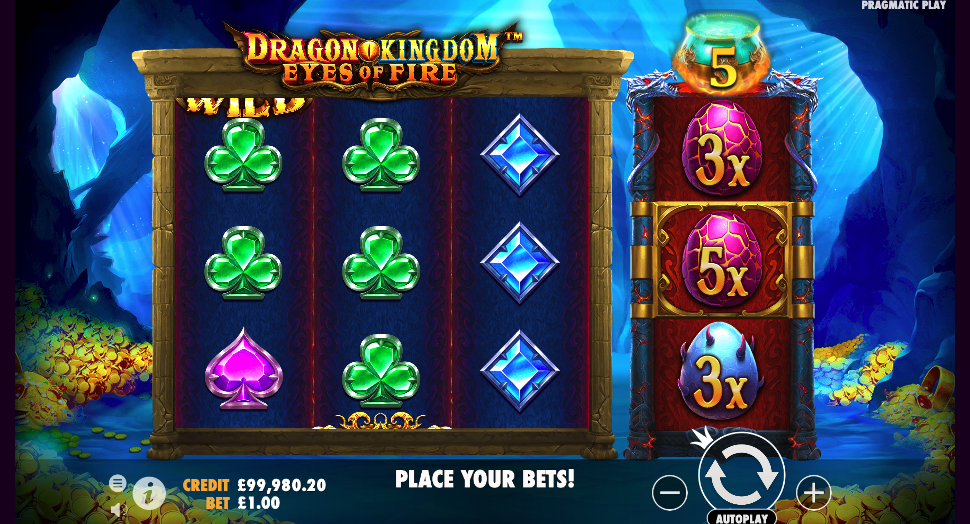 Dragons are always an exciting addition to any online slot machine and here they’re back, guarding their huge stacks of gold coins in Dragon Kingdom: Eyes Of Fire; it’s developed by Pragmatic Play and from £0.05 per spin it offers players the chance to open dragon eggs for large win multipliers.

Dragon Kingdom: Eyes Of Fire is a three reel slot with three rows and five fixed paylines; all the action takes place inside the dragon’s cave, lit by distant blue light and strewn with piles of gold coins and jewels.

The three higher value symbols are the blue dragon, the red dragon and the flaming red seven; bejewelled playing card symbols in pink, red, green and blue represent the lower values. The dragon’s eye is the wild symbol and it will substitute for all others.

Gameplay revolves entirely around this feature which relies on non-winning spins to increase the multiplier values displayed on the dragon eggs on the right hand side. There are various levels which are triggered for certain numbers of consecutive losing spins:

When a win is finally achieved the payout is made and the reels and multiplier values all reset to their starting point.

A progressive feature such as this can only work on a high variance, three reel slot because of the rarity of landing wins; all the ingredients are here therefore for an enjoyable dragon-themed game in which each losing spin increases the eventual win.