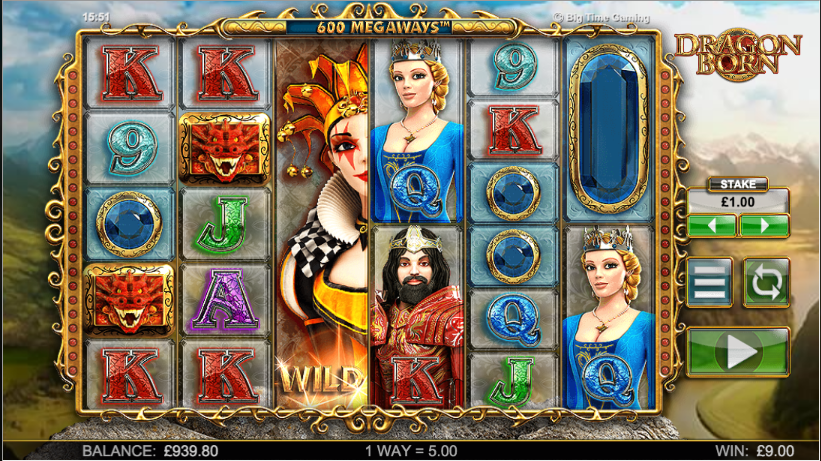 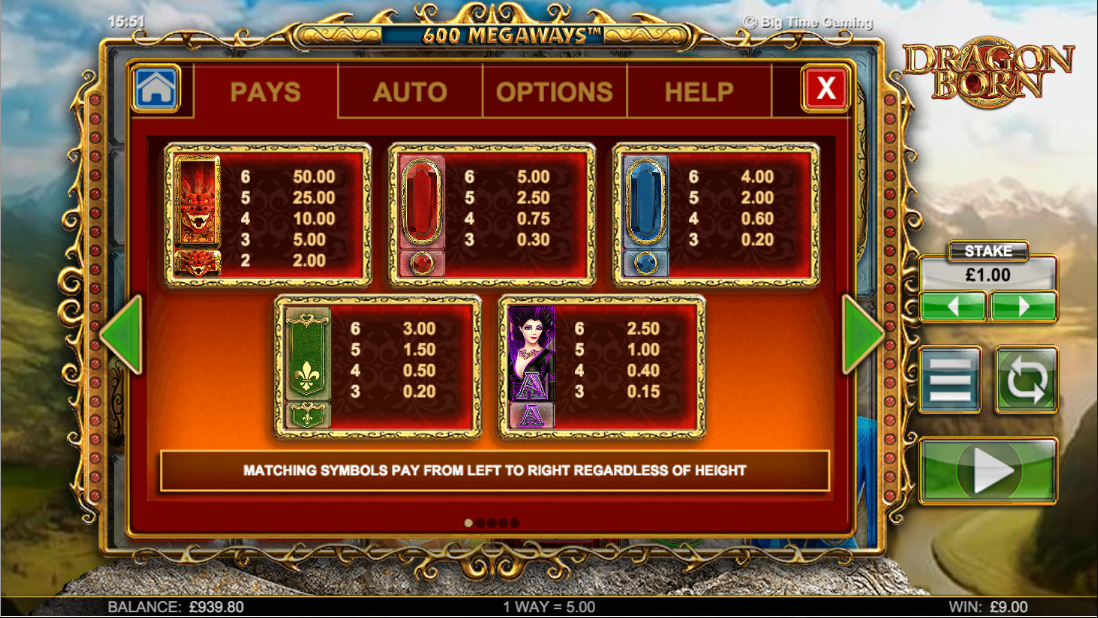 We can’t deny that we like a fantasy-themed online slot as much as the next nerd so we’re always happy to check out a game involving dragons, jesters and mystical, mountainous landscapes. This particular one is called Dragon Born, it’s developed by Big Time Gaming and it’s set in some indeterminate medieval era. Check out all the essential details below.

Dragon Born is a six reel slot with up to seven rows and an almost unbelievable 117649 ways to win (we’ll explain how this is possible a big further down). Behind the neat-looking, gold-rimmed reels there’s a view of a hilly green landscape with snow-capped peaks in the distance.

There are ten basic symbols and they’re all related to the theme and so we have a dragon, red gems, blue gems, a green standard, a woman in purple, the king, the queen, the green knight, a yellow shield and a blue cup. All symbols can appear stacked, occupying up to seven positions on each reel.

The jester is wild and will substitute for all other symbols except the scatter; she can also appear stacked on all reels and will multiply any wins to which she contributes by the number of symbol positions she takes up. She can appear on a maximum of two full reels per spin.

The large diamond is the scatter symbol which activates the main feature.

This is Big Time Gaming’s ‘Megaways’ feature and on each reel there can be between one (a stacked symbol) and seven symbols on each spin; if you have seven symbols landing on all reels then that multiplies up to an enormous 117640 ways to win when you consider that you only need matching symbols in adjacent reels to win. The number of ways to win varies with each spin because different numbers of symbols land on each reel – that number is displayed above the reels.

This is triggered by landing between three and six of the diamond scatter symbols anywhere in view for which you will receive the following:

On each free spin all reels contain the maximum of seven symbols and any further diamonds landing will award one extra free spin.

Dragon Born is a great slot with some aspects that mark it out from the normal fare such as the large number of symbols and paylines; it looks and sounds good and it comes with an RTP of 95.00%.