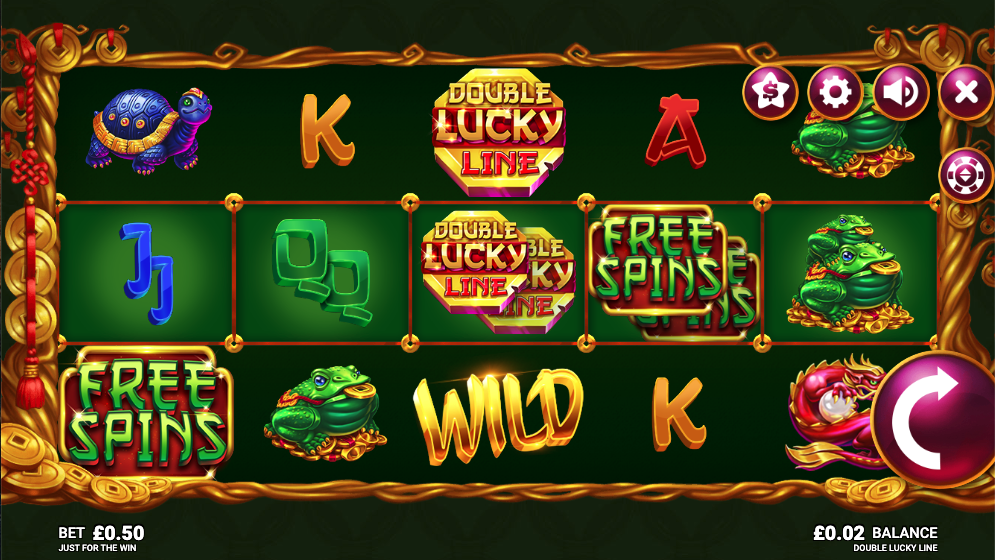 Stylised animals, gold coins as far as the eye can see and a traditional Chinese soundtrack can only mean that we are once again making the virtual trip east to check out an online slot themed on the Orient; this one’s called Double Lucky line, it’s developed by Microgaming/Just For The Win and it offers players combos of up to ten symbols and plenty of free spins.

Double Lucky Line is a five reel slot with three rows and seventeen fixed paylines; the design is simple and ornate at the same time with a golden frame around those reels accessorised with gold coins.

The high value symbols are the games’ logo and three stylised animals – the dragon, the toad and the tortoise; J, Q, K and A represent the lower values and all symbols can appear as doubles hence the ability to form winning combos of up to ten symbols.

The wild is a big, gold ‘Wild’ which will replace all standard symbols to help create winning matches while the scatter is the single or double ‘ Free Spins’.

This can occur at any time during the base game and up to six extra wild symbols will added in view.

Landing at least five of the Free Spins scatter symbols anywhere in view will five free spins plus one more for each additional triggering symbol; when the round is underway a new symbol – the Lucky Wild – is introduced which will award an extra spin when it lands; that position will also turn into a double for the rest of the round.

Double symbols aren’t a particularly new concept but it’s all nicely done here – Double Lucky Line benefits from Just For The Win’s attention to detail, smooth gameplay and high quality graphics and it’s one to recommend.