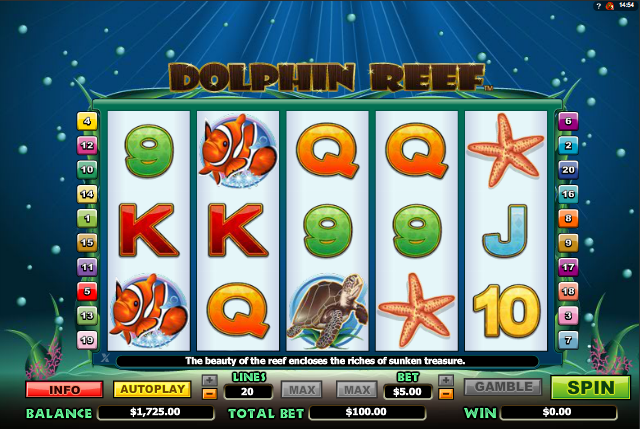 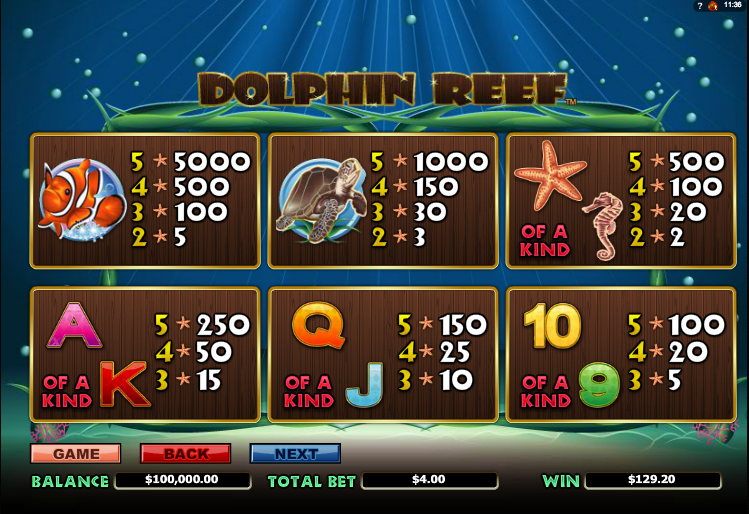 We’re heading deep below the ocean waves for the review of this aquatic online slot from Quickfire; Dolphin Reef takes place so far under the sea that light from the surface barely troubles the inhabitants. We’ve played a fair few fishy-themed games in the past so let’s find out how this one measures up.

Dolphin Reef features five reels, twenty paylines and plenty of ocean-dwelling creatures; behind the reels there’s a watery scene and we’re clearly perched on the sandy bottom of this part of the sea. Faint shafts of light stream in from above and illuminate the reels which are framed by plant life.

The basic symbols are the usual boring 9, 10, J, Q, K and A but the more valuable ones are a seahorse, a starfish, a turtle and an orange tropical fish.

There’s a scatter symbol which is a locked treasure chest and a wild represented by a cheerful-looking dolphin. The dolphin is also the bonus symbol which activates the free spins.

So the happy dolphin is the key to the free spins here and you’ll need to land him on reels two and four to trigger this bonus.  In fact the dolphin only appears on those two reels which impacts his usefulness as a wild somewhat.

Anyway you’ll now receive just five free spins but reels two and four expand so they are totally wild; this means you tend to win a lot on each spin. Between each spin, dolphins dive between the two wild reels in a pleasing way.

Fancy gambling that last win? You can when playing this game by clicking the ‘Gamble’ button underneath the reels. You’ll now play a game in which you predict the next playing card – the correct colour will double your win and a correct suit will quadruple it. Five wins in a row are the limit.

Don’t get too carried away by the gamble feature – winning five in a row is extremely unlikely and continually gambling will lose you your bank roll fast.

There’s nothing particularly wrong with this slot but also nothing too exciting; it has a nice relaxing soundtrack and a neat twist on the usual free spins so it’s worth a go but not, perhaps, for too long.