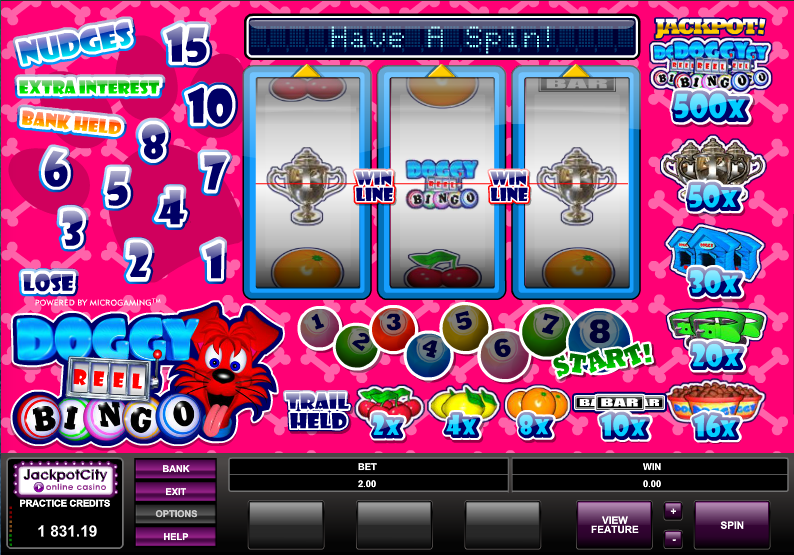 For UK slots players, Doggy Reel Bingo may be the closest thing we’ve ever seen to an online fruit machine; it’s a three reel slot with all those familiar fruity features such as holds, nudges and a trail which leads to the bonus feature.  The theme is one of a dog show combines with bingo and it has met things closet fans would want from a game.

With it’s three reels and single payline, Doggy Reel Bingo may seem quite simple but rest assured it is not.  Something extra will happen with each few spins so even if you’re not winning, it still feels like you’re getting somewhere.  The symbols vary between fruit such as cherries and lemons up to dog-related icons such collars, kennels and a Crufts-style trophy.

This is the best place to start and you will notice the trail of bingo balls below the reels; reach the eighth one and the bonus feature will start.  The numbers on some of the symbols will move you along the trail and it’s important to make use of the ‘Hold’ feature to keep the numbers on the symbols in place and help get you to the end.

When you do reach the eighth ball the feature begins and you will see a screen like the one below; prize-seeking dogs will walk across the screen and cross off numbers on the bingo card.  You can see this in action in the video above.

The first feature prize to have it’s number completed will be the one you win and these are as follows:

This feature is awarded when a you land a symbol with ‘bonus’ on it on the payline.  When it happens the top window will cycle through the following options and you stop it by pressing the ‘Stop’ button:

Up to four nudges can be awarded randomly or in the bonus features; use them to jog the reels down to form winning combos or accumulate trail numbers.  Nudges are occasionally allowed to be held over to the next spin with the Nudge Bank.

Awarded randomly if you don’t win, one reel be held and the other two nudged down until a winning combo is formed.

UK players will already know that the aim in games like this is to accumulate enough numbers to move along the trail and trigger the feature.  With this in mind, use the randomly awarded nudges and holds with care.

Maybe it’s because we like fruit machines but this is just a fantastic online slot; it’s got something for everyone from the classic slots fans to the complex feature lovers.  Try it now!