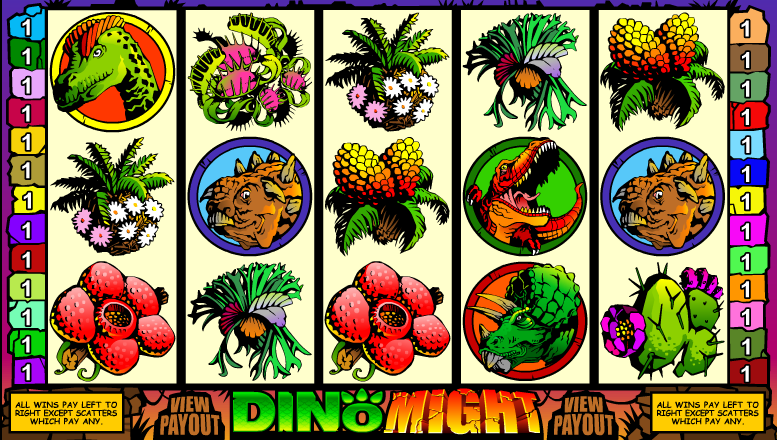 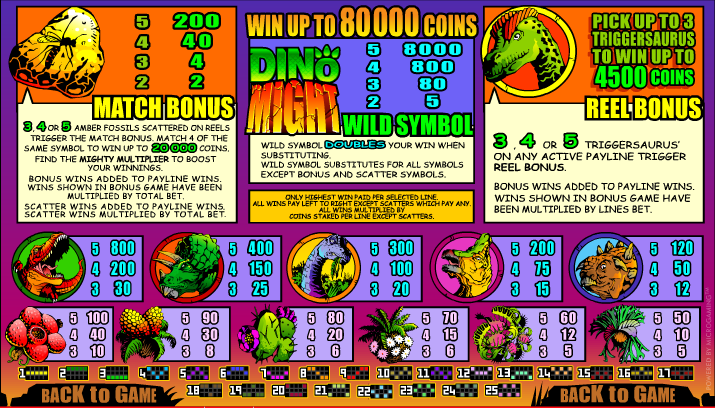 Millions of years ago dinosaurs walked the earth and they would not doubt be delighted to hear that they are now the basis of an online slot machine developed by Microgaming. It’s name is Dinomight and it joins a long list of  games based on animals and nature although these creatures are of a very different nature.

Dinomight plays out over five reels and twenty five paylines and although the graphics seem slightly dated now, their cartoonish quality is still quite appealing.  The symbols which inhabit the reels are made up of six different types of plants and then five different terrible lizards. We think they include a tyrannosaurus rex, a triceratops, a diplodocus, which we can’t identify and one called a triggersaurus  which is a made up name.

The Dinomight logo is the wild symbol which doubles any wins it helps create, the triggersaurus and the amber fossil are both trigger the bonus features.

The amber fossils are scatter symbols and you’ll need to land three, four or five of them anywhere on the reels to trigger this mini-game.

As you can see from the video below, you are presented with a grid from which you must keep picking squares until you have uncovered four matching fossils. A win is guaranteed here and you may also fns a multiplier for your prize if you’re lucky.

This is where the triggersaurus comes in handy and you need to land three, four or five of him on an active payline to trigger this brief bonus.

All you need to do is pick one of the triggersaurus symbols to receive a coin prize.

If you want to give yourself a chance of winning the Reel Bonus then you should play with as many paylines as possible – this feature is only triggered on an active payline.

As we’ve already said, this is a little dated but there are plenty of features which seem to get triggered pretty regularly. The cheerful dinosaurs add to the colourful ambience.