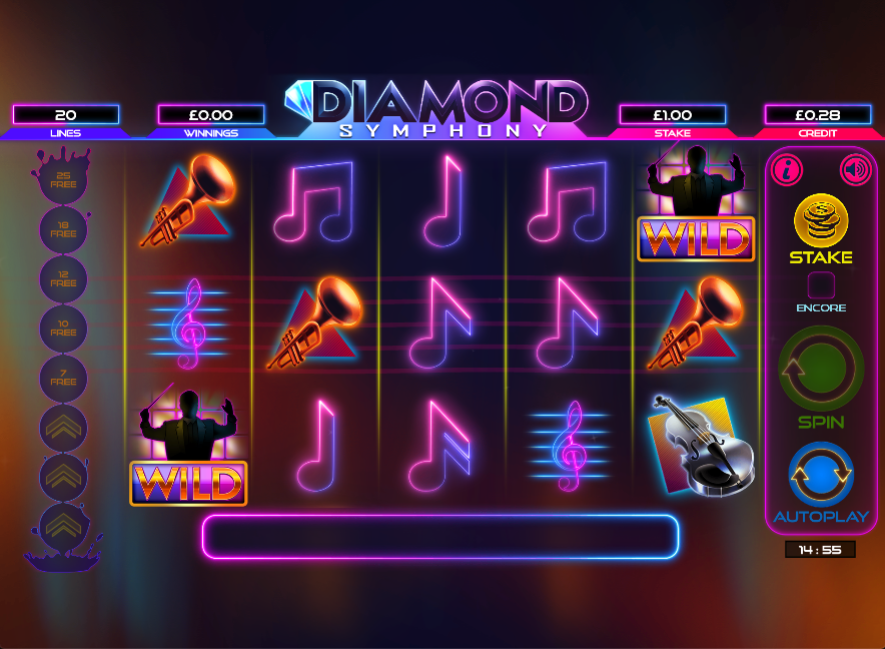 Music is the theme of this striking online slot from Bulletproof Games which comes with free spins, collapsing reels and a chance to pay a little more for the Encore option – it’s called Diamond Symphony and you can find out how it all works below.

Diamond Symphony is a five reel slot with three rows and fifteen fixed paylines; the design is colourful but understated and there’s a 90s vibe to the action which keeps the gameplay ticking along.

The symbols are all related to the musical theme and include notes (a treble clef, a crotchet, a quaver and a semi-quaver), a trumpet, a cello, a grand piano and there’s also a diamond.

The wild symbol is the conductor and he’ll substitute for all others to help form winning combinations.

Diamond Symphony features collapsing reels which means that any symbols appearing in winning combos will disappear and be replaced by more falling in from above – subsequent wins may then be formed and the process continues.

Each subsequent winning combo will light up the trail to the left of the reels and will eventually award free spins depending how far you get. There’s an increasing multiplier in this round which will be applied to any wins earned.

The Encore option will add 50% to your stake but it will mean that landing just two or three subsequent wins will award one free respin rather than having to land four in a row.

Collapsing reels, a classy design and some engaging music – what’s not to like about Diamond Symphony? We haven’t reviewed many from Bulletproof Games but if this is what they’re like, we look forward to lots more.