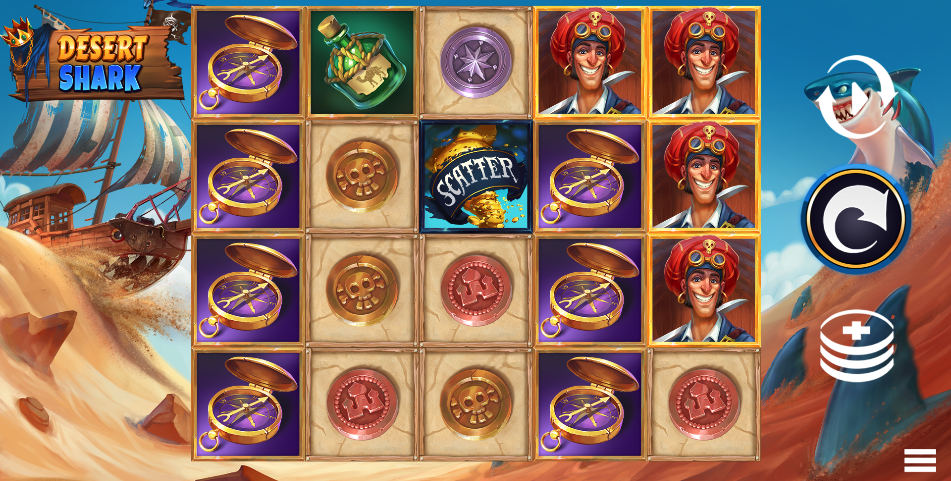 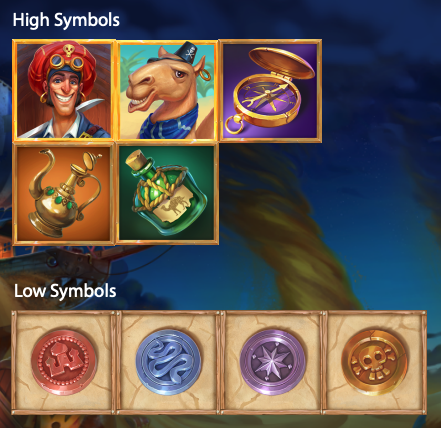 The desert can be a very dangerous place even without the pirates and sharks which surf and swim their way through the sun-baked dunes; Desert Shark is an online slot from Fantasma games which lifts the lid on this previously unknown peril while offering players the chance to win free spins and wild multipliers along the way.

Desert Shark is a five reel slot with five roes and forty fixed paylines; behind those reels there’s a dramatic scene showing a pirate ship steaming through the rocky sand towards a pack of determined sharks coming the other way.

The high value symbols include the cheerful pirate captain, the camel, the compass, the bottle of grog and the magic lamp; discs inscribed with various patterns make up the lower values.

In the base game the two wild symbols are the regular one and the Swim wild – both replace all standard symbols but the Swim Wild also has a feature attached which is explained below. The tornado is the scatter symbol.

Landing at least two of the Swim Wild symbols anywhere on reels three, four and five (or just one symbol in the free spins); on rows to the left of the wilds the symbols get upgraded to more valuable ones, scatter symbols become wilds and wild symbols get a multiplier increase.

This is triggered by landing three of the tornado scatter symbols anywhere on reels two, three and four for which you will receive eight free spins; during this feature at least one Dynamite Wild will be placed on reels one to three and will become ‘activated’ by a Swim Wild landing to its right. A Dynamite Wild will the upgrade between two and six extra symbols. It’s not possible to trigger any more spins from within this feature.

Narrating the untold story of desert warfare between pirates and sharks is a stroke of genius and the slot’s not too bad either – clever wild features combined with free spins can produce some big wins for the luckier players and hopefully that’s you!