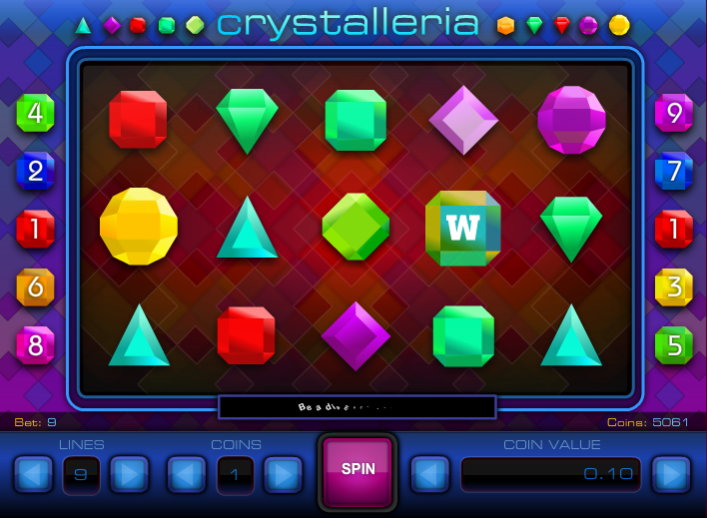 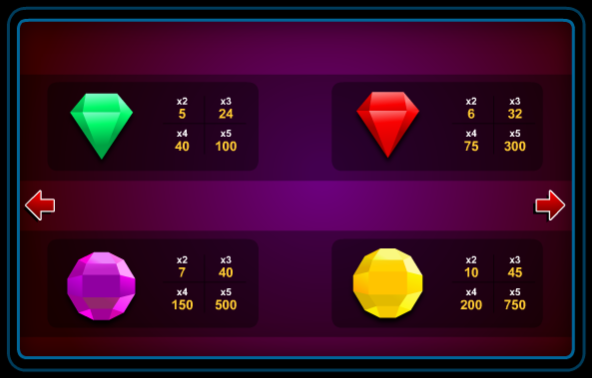 We always like to see a new gem-themed online slot so it was a pleasant surprise to find that 1×2 Gaming have released just such a game; it’s called Crystalleria, a name which sounds ideal for a jewellery shop but even more suitable for this colourful reel spinner. It’s recognisably from this particular developer and in includes a funky free spins round.

Crystalleria is a five reel slot with three rows and up to nine paylines; it’s a colourful affair with a gleaming blue and purple scheme but behind the reels there’s a reddish glow emanating from the geometric shapes. There’s a minimalistic soundtrack which complements your gameplay without interfering which is always a good thing.

There are ten standard base game symbols which are of course all gems and we’ll describe them by colour – yellow, purple circle, red, light green, orange, green, aquamarine, red, purple and light blue.

The wild symbol is a nice greenish gem with a big ‘W’ engraved on the front; it will replace all symbols except the scatter and it doubles any wins on the same payline – it doesn’t actually have to be part of the winning combo.

The scatter is represented by an orange/purple gem with a big ‘F’ engraved on the front and it activates the main feature.

This is the only extra feature in Crystalleria and it’s triggered by landing the following anywhere in view:

It’s not possible to re-trigger any more spins from within this round and there’s no extra multiplier for any wins.

Crystelleria is exactly what you might expect from 1×2 Gaming and that’s a good thing; these slots are always eminently playable with plenty of character and charm. There’s an RTP of 97.32%.