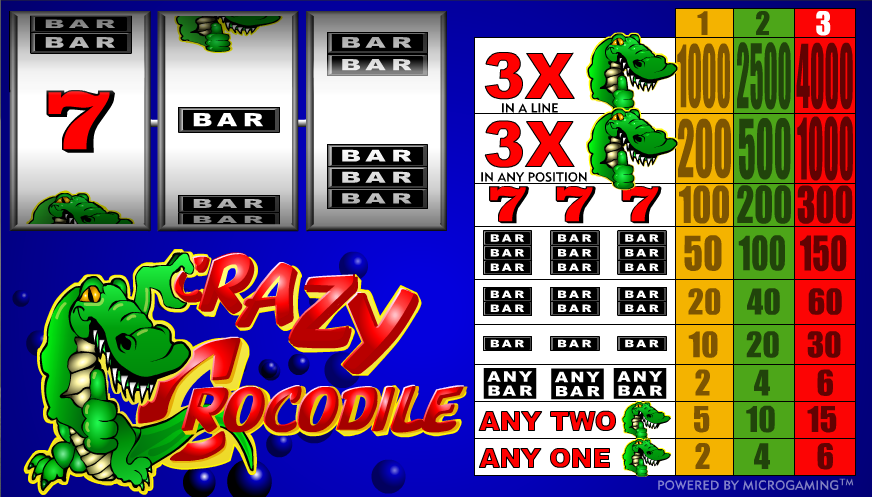 Are crocodiles crazy by nature or do we just regard them as a bit deranged because of their fierce looks and occasional habit of eating careless swimmers who stray a little close to their territory? We could probably do a bit of research to find out but that would involve more work than we are accustomed to and so we’ll just assume that these creatures are ‘fun’ crazy rather ‘insane’ crazy. This classic online slot from Microgaming is based on one of these fun-loving reptiles.

Crazy Crocs is a three reel slot with just one payline and everything on the screen is set against the backdrop of deep water. The crocodile himself is lurking in the bottom left hand corner, offering a cheery and green thumbs up to lure you into a watery grave – or perhaps just to tempt you to part with some money.

The paytable on the right displays the small number of symbols and these include single, double and triple bars along with the crocodile. The crocodile is also a wild symbols which will substitute for any other to form a win.

Wins are obviously formed with matching symbols on the single payline but there are a couple of other symbol combinations.

There are three coin values available and this will provide players with a betting range of £0.25 to £15.00. The coin value you select will be based on your budget but it’s worth noting that playing with two coins (which will double your stake) will give you the opportunity of winning 2.5x the value for landing the top two paying combinations.

Crazy Crocs is one of a number of similar classic slots from Microgaming and while it’s nothing special, it’s fun for a few minutes. Just watch out for those sharp teeth.