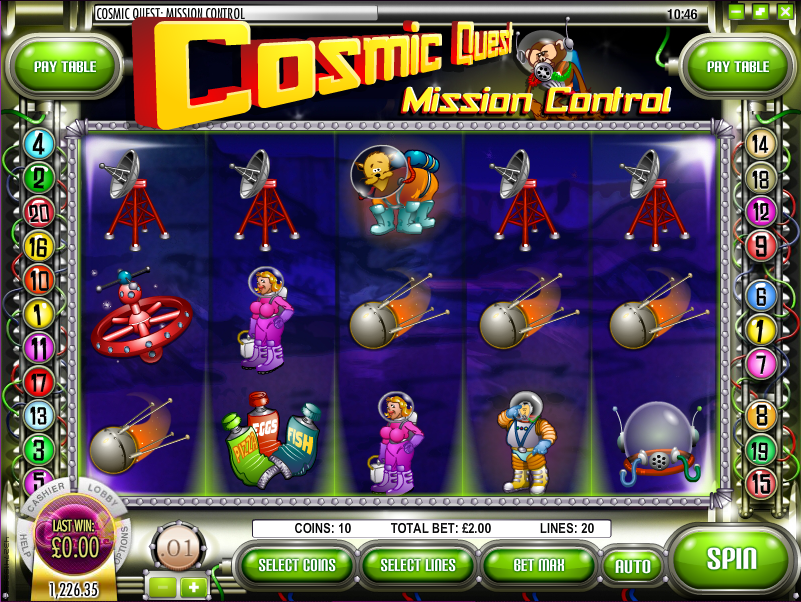 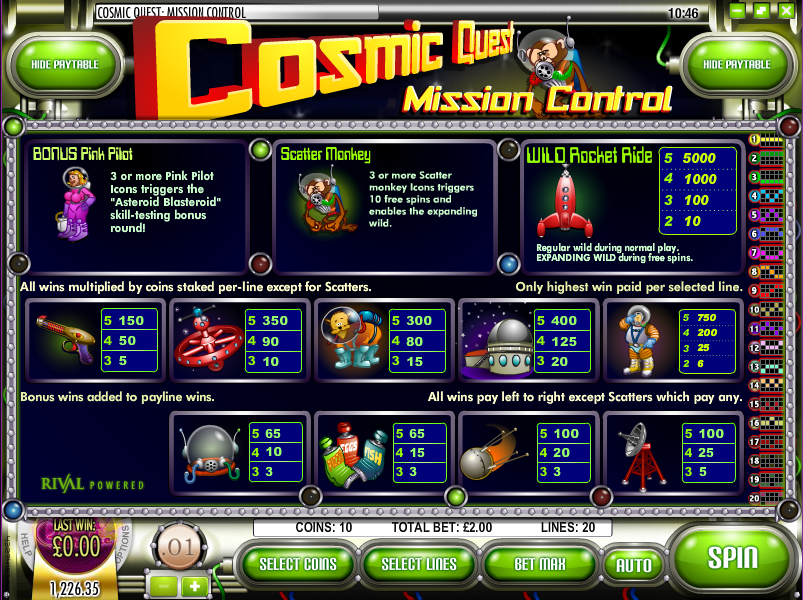 The vast vacuum of space is our destination as we play this online slot from Rival Gaming; it’s called Cosmic Quest: Mission Control and it’s part one of a two part series – the second part is called Mystery Planets. There’s a sense of humour and a quirkiness to this game that is obvious from the start and it’s also one of Rival’s i-Slots range.

Cosmic Quest plays out over five reels and twenty paylines and there’s a real ‘Lost In Space’ vibe here with lots of retro items occupying the spaces on the reels. Symbols include a radar tripod, a flying object, some tubes of food, a helmet, an astronaut, a dog in a spacesuit, a space station and a ray gun.

Special symbols include the Pink Pilot, the Monkey in spacesuit which both trigger extra features and the Red Rocket which is wild.

This mini-game is triggered by landing three or more of the Pink Pilot scatter symbols anywhere on the reels; there’s some interactivity here because you will now get to play a game in which you must use your skill to destroy asteroids. The more you destroy, the higher your prize will be when the round finishes.

The monkey in the spacesuit is the important symbol here and if you can land three or more of him anywhere on the reels you will trigger this feature.

Ten free spins will be yours and during this round the expanding wilds will be in force. While the rocket is just a normal wild in the base game, during the spins is will expand to fill all positions on that reel if it can make a win.

The features here are triggered by scatter symbols here which means they do not have to be on active paylines to win. This is ideal for low rollers because you can play with just one payline and still have the same chance of reaching those games.

Like other i-Slots, Cosmic Quest has lots of character and that’s always a good start; it’s one of the more enjoyable sci-fi slots we’ve played and it comes complete with plenty of bonus features and an appropriately futuristic soundtrack.