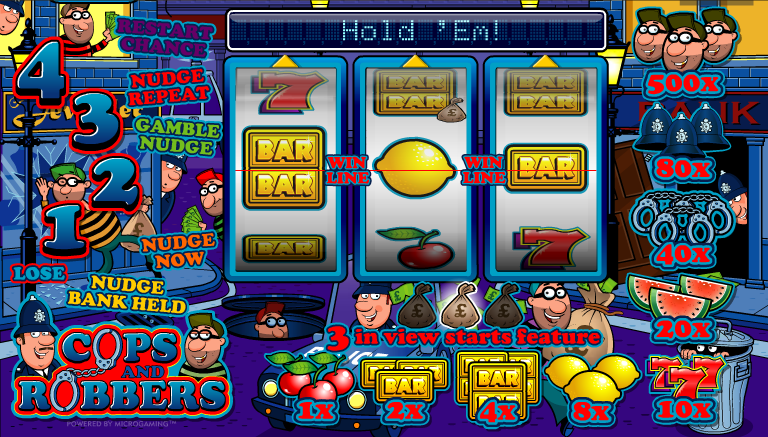 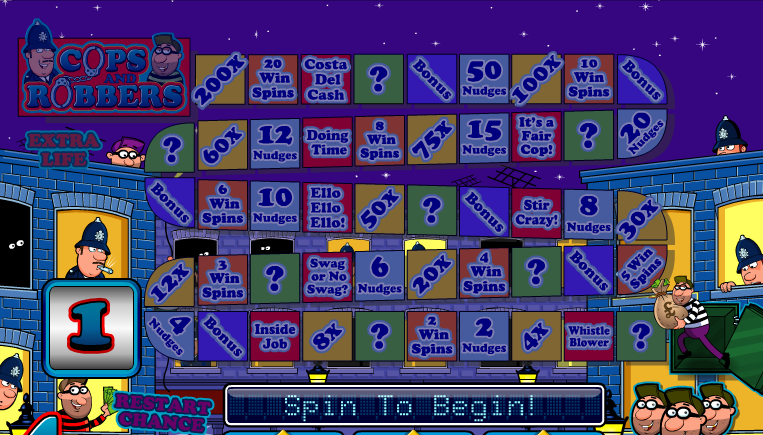 Finding the lighter side of crime is never a particularly easy thing to do but there are loads of crime-themed online slots which have managed just that; Cops and Robbers Classic from Microgaming adds one more to the genre and it’s a three reel, fruit machine-style game with a groovy bonus feature and lots of base game extras.

Cops and Robbers Classic plays out over three reels and just the one payline and the narrative tells the tale of a their trying to escape from the police with a bag of money (helpfully labelled with a ‘£’ sign).

We have the traditional cherries, bars, sevens, lemons and melons at the bottom end of the value scale but handcuffs, police helmets and the robber are at the higher end – there robbers will win you 500x your total bet.

You will notice little bags of money attached to some of the symbols and if you can land three of these anywhere on the reels you will start this funky mini-game.

As you can see from the screenshot below the idea is to press the ‘Spin’ button and send the robber off up the board, pursued by the policeman. If he catches you you lose and the idea is to get as far as possible and take the prize offered before he inevitable catches you.

The squares you land on can be multipliers, nudges or bonus squares which offer a random prize (but sometimes also end your game).

Nudges are awarded randomly and offer the player the opportunity to jog single reels down to try and make a winning combo or collect the money bags. Sometimes you will also be able to gamble them or bank them for the next spin.

Holds allow the player to freeze any reels to try and grab a win on the next spin.

On a non-winning spin the notice board above the reels may display ‘Shifta’ which means a guaranteed win on the next spin.

If you see this message on the notice board, ignore any holds offered and just spin the reels for a guaranteed win.

Earning the feature is what’s fun about this game but it’s pretty hard to win much money once you make it there; the policeman catches up with you pretty quickly and landing on a Mystery square usually seems to result in a loss. Collect the winnings as soon as you are happy with them.

We like these fruit machine-style games; they always remind us of the type of game you find in a pub in the UK and all the bonus features just add to what is a great game. Give it a go.