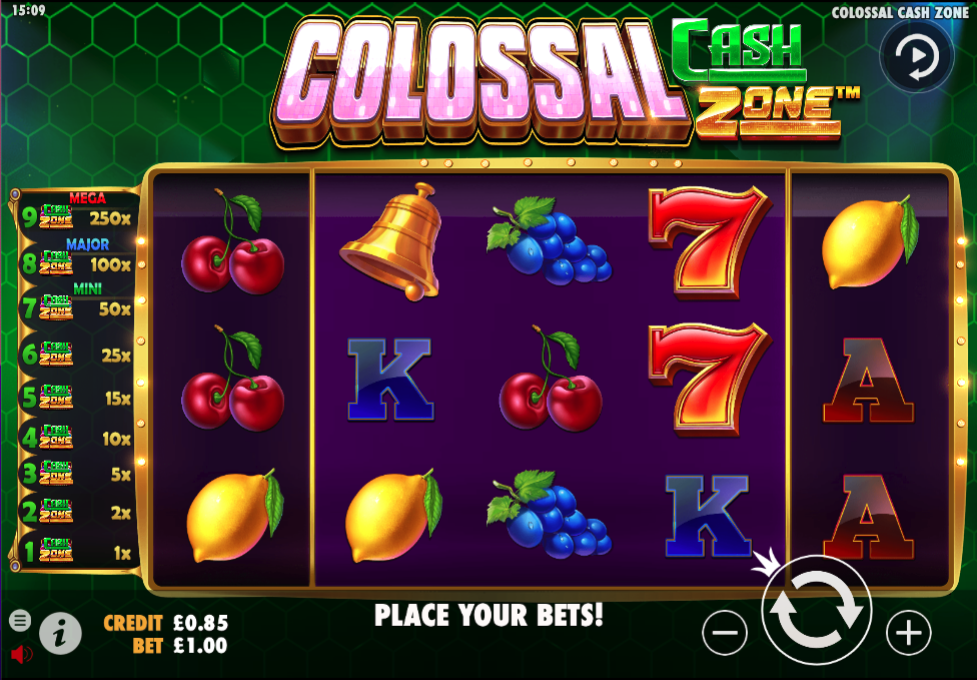 Those online slots players looking for the chance to grab a bit of extra cash should think about dipping their toe into the Colossal Cash Zone – this fast-moving game from Pragmatic Play combines a generous free spins feature with a jackpot prize of up to 250x the stake for grabbing Cash Zone symbols during gameplay.

Colossal Cash Zone is a five reel slot with twenty fixed paylines and all the action takes place within a gold frame which floats again a green mesh backdrop which pluses with light.

Aside from the red sevens and golden bells the symbols are a fruity bunch and include grapes, lemons and cherries; J, Q, K and A make up the lower values. The red ‘Wild’ is wild and the large diamond is the bonus symbol. The Cash Zone symbol appears only on reels two, three and four.

Landing those Cash Zone symbols on reels two, three and four guarantees a prize according to the paytable shown to the left of the reels with the maximum being 250x the stake:

Reels two, three and four can also contain large symbols of up to 3×3 positions in size – for payout purposes these are equal to the number of positions covered so for example a 2×2 colossal symbol is worth four regular symbols.

This feature is triggered by landing at least three of the diamond scatter symbols anywhere in view and there are up to twenty two available if you can land eleven diamonds in one go. Essentially the number of spins you win are double the number of diamonds collected.

It’s not possible to trigger and more spins once the round has started but a multiplier of up to 20x will be applied to any wins on that spin.