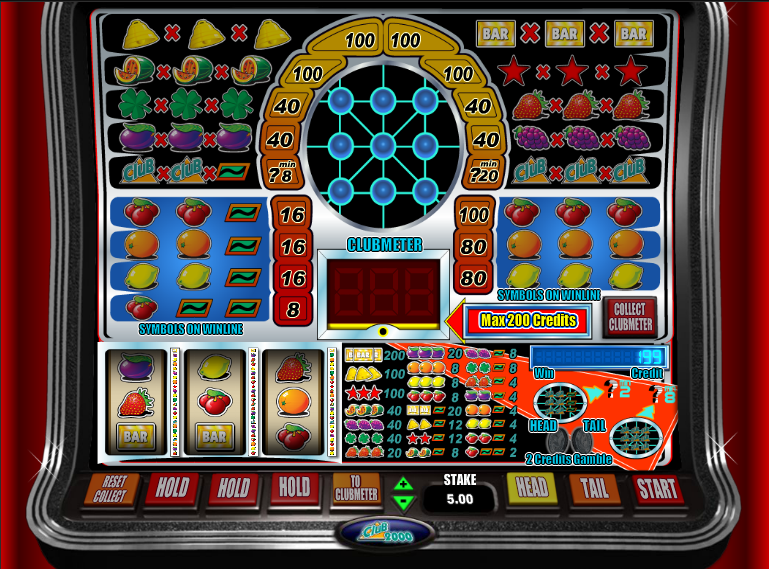 It’s time to get back to basics with this engaging online slot machine from Simbat Entertainment. Posh graphics go by the wayside here and there are no real bonus features but that doesn’t matter, there’s still plenty going on here and if you want to play a game which offers you a more realistic casino experience, look no further.

Club 2000 has just the three reels and one solitary payline and those reels are almost hidden away in the bottom left hand corner. To the right of the reels is the paytable for the base game and the small gamble feature.  The top of the screen is taken up by information relating to the bonus feature.

Most of the symbols are of the traditional variety and include cherries, lemons, oranges, plums, strawberries, grapes, melons and bells but there are also stars and four leaf clovers on show. The Club 2000 logo acts as a scatter which can pay a mystery prize of up to 200 credits.

The top half of the machine relates to this feature and to reach this section you need to land some wins in the base game. When you do land a winning combo, you will be given the choice of collecting that cash or transferring those credits to the Clubmeter.

The Clubmeter game is played at four credits per spin and the payouts are consequently higher. Anything you win in this stage is put into the Clubmeter up to a maximum of 200 credits, any surplus is placed back in your base game credits. You can collect those Clubmeter credits at any time and head back to the base game.

Each base game win can be gambled by using the ‘Head’ and ‘Tail’ buttons to the right of the reels. Just click one of the buttons and you will double up your prize if you’re successful. Get it wrong and you will lose that win.

It’s tempting to place every win into the Clubmeter and just play until all your credits have gone; obviously this is not the way forward so be conservative with your credit transfers.

We like this game – it’s nice and simple but it looks the business and it features an extra level of complexity which should appeal to plenty of players. Well worth checking out.