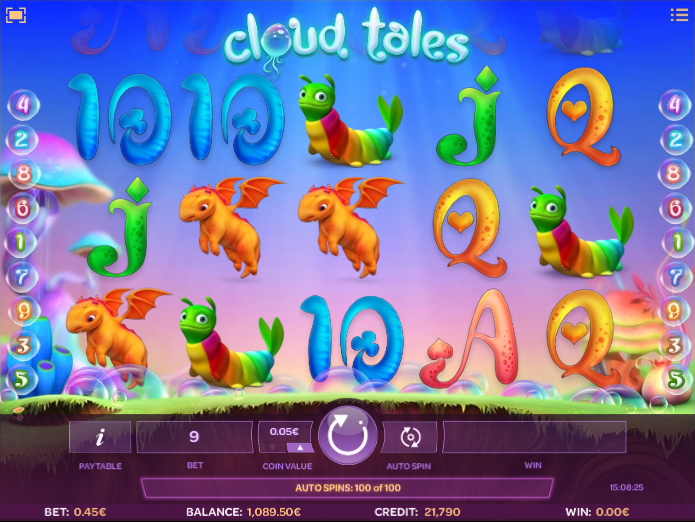 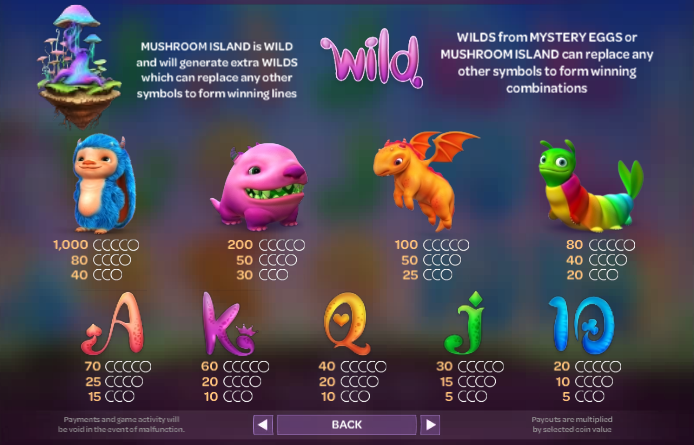 If you were to design an online slot machine while under the influence of some sort of hallucinatory narcotic you might well come up with something like Cloud Tales, a game developed by iSoftBet with a cast of freaky characters and some imaginative bonus features,

Cloud tales is a five reel slot with three rows and just nine fixed paylines; this fantastical world is filled with multicolour plants and rainbow bubbles visible behind the transparent reels.

The wild symbol is the Mushroom Island which appears only on reel three – it will substitute for all others to help form winning combos and it also has a bonus feature attached which is explained below.

As well as acting as a normal wild, when the Mushroom Island lands it will distribute a random number of extra wwilds on to the reels which will then be reevaluated for any payouts.

This is triggered by landing a Mystery Egg symbol on reels two, three or four; this will hatch to reveal one of the following mini-features:

Symbol Switch – symbols on the reels will swap position to (hopefully) provide a win which will be multiplier by 4x.

Wilds + Multiplier – the egg becomes wild and makes other symbols wild also; any wins will be subject to a random multiplier value.

Wild Reels – up to five reels will become completely wild.

Wild Reels + Respin – the reel containing the egg will become completely wild and remain in place for one respin; more eggs landing will repeat the process.

Cloud Tales is a refreshingly unusual slot with some top notch (but slightly freaky) graphics and some clever bonus features; it’s worthy of a solid recommendation and comes with an RTP of exactly 96.00%.