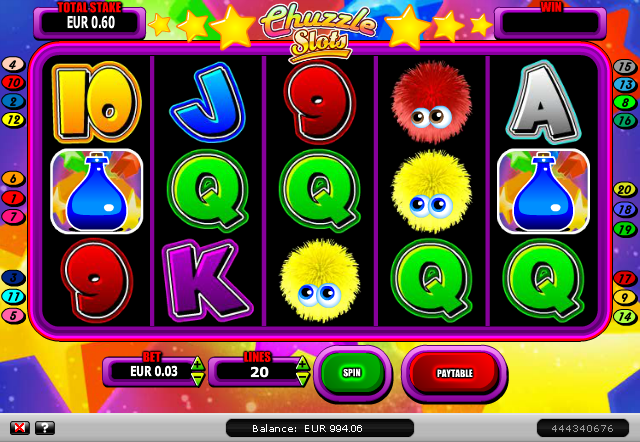 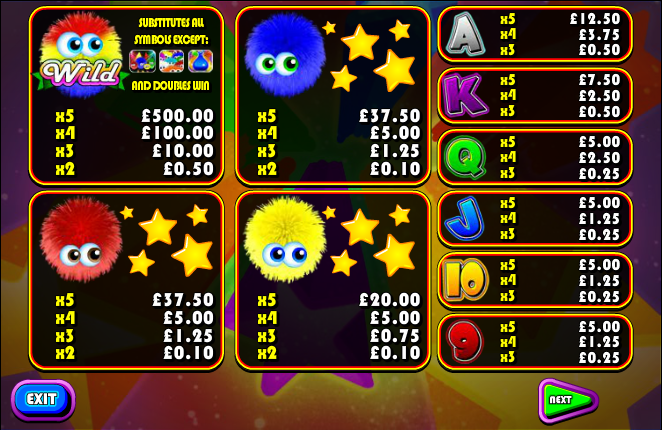 If you’ve ever played the ubiquitous Bejeweled arcade game then you may well have come across Chuzzle somewhere along the way; it’s also produced by Popcap and the aim is to match three or more cute creatures to progress.  Gamesys have produced an online slot based on the game and it includes a nod to the features of the original game.

Chuzzle looks lovely – it features five reels and twenty paylines and it’s a veritable riot of colour.  The background is filled with red, blue, green and gold stars and the main symbols are a selection of the little furry Chuzzle characters.

A multicoloured Chuzzle is wild and there are three bonus scatter symbols which trigger the three different bonus games – a bottle, a Chuzzle disco and Chuzzle reaction.

The partying Chuzzles are the key to this feature and you’ll need to land three or more of the disco scatter symbols anywhere on the reels to receive the following:

When the spins have finished you will be asked to pick one of four Chuzzles who will reward you with a multiplier.

Three or more bottle symbols anywhere on the reels will trigger this bonus and it’s a simple one; all you need to do is pick one of the bottles on the screen to reveal a multiplier which will be applied to your total bet.

You may well have already guessed that three or more of the reaction scatter symbols will activate this feature and it’s a good one, if a little brief.  Any three symbols which match either horizontally or vertically on a new screen will award a win and then disappear, their spaces being filled by more creatures dropping from above.  Those new symbols can create further wins.

You don’t have to play with maximum paylines because all the features are triggered by scatter symbols.  The more lines you play with however, the higher your payouts will be.

What a great little slot – it’s really enjoyable to play, cheery to look at and amusing to listen to.  Three bonus features should keep most slots fame happy.