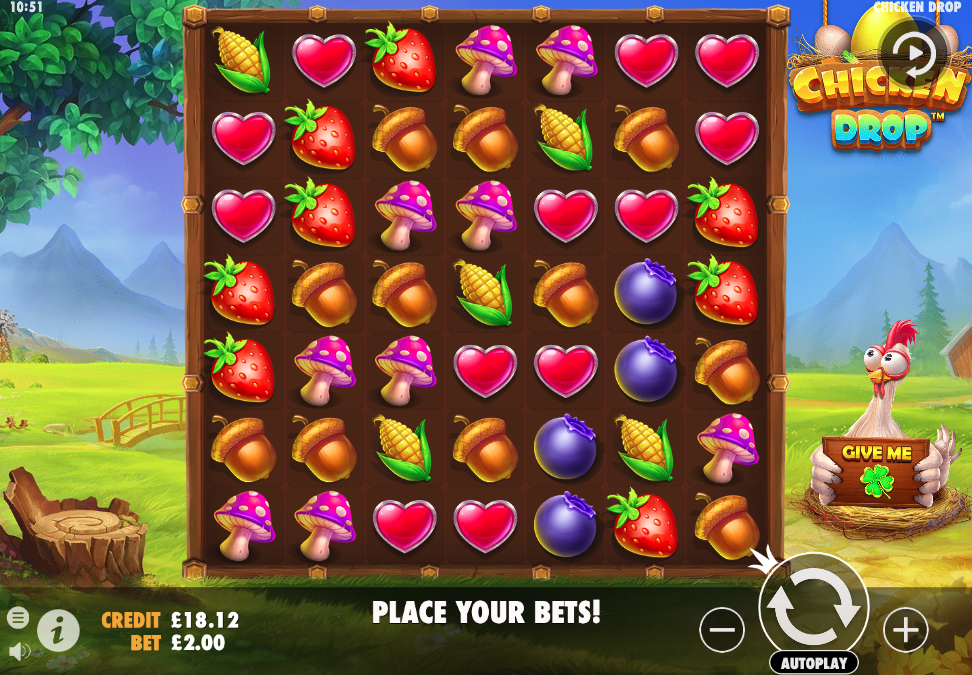 It’s a sunny day down on the farm as we check out this poultry-themed online slot machine – it’s called Chicken Drop, it’s developed by Pragmatic Play and from £0.20 per spin it comes with collapsing reels, free spins and Golden Eggs.

Chicken Drop plays out on the 7×7 grid shown above and it’s part of a very tranquil scene of meadows, red barns, distant mountains and the chicken in the lower right had corner; your aim is to create clusters of at least five matching symbols connected horizontally and/or vertically after which they’ll disappear and make room for more to fall into the empty spaces, hopefully continuing the process.

The symbols are all related to the theme and include strawberries, blueberries, sweetcorn, acorns, mushrooms, blue spades and red hearts; there’s now wild in this slot but the special symbols are the golden watering can, the four leaf clover and the chest.

During the base game and free spins the following two items can appear on the reels to help you out:

Both features reset at the end of a spin.

Landing three, four or five of the chest scatter symbols anywhere in view will award 10, 15 or 20 free spins respectively; during this round one egg drop is guaranteed on each spin and any progression in size and multiplier value will be saved between spins.

Four more chests during this round will award an extra five free spins.