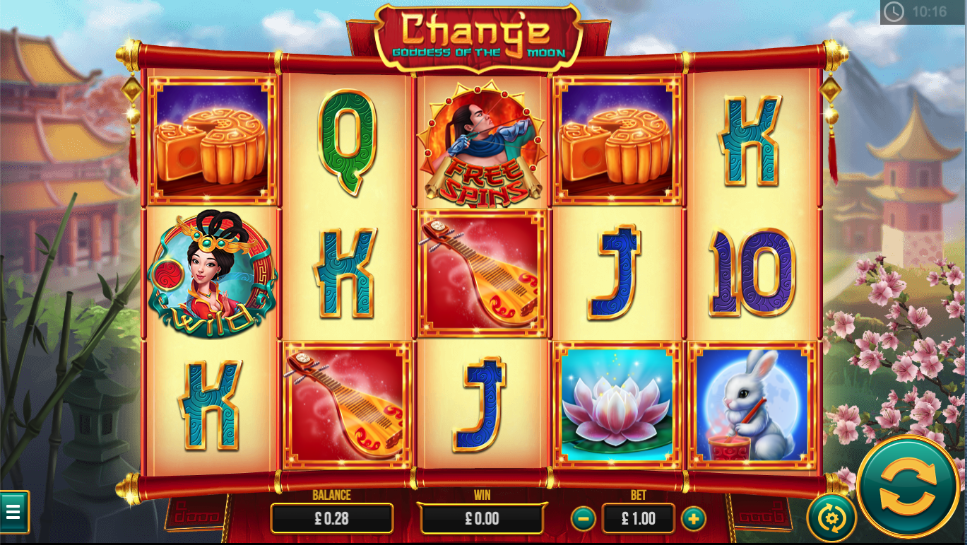 As all online slots fans will already know Chang’e is the Chinese god of the moon and so deserved her own dedicated game – it’s developed by Pariplay, it’s called Chang’e – Goddess of the Moon and it tempts players with free spins and wild respins.

Chang’e – Goddess of the Moon is a five reel slot with three rows and twenty fixed paylines; those red and gold reels float in front of a familiar Chinese scene of traditional buildings, bamboo, cherry blossom and distant mountains.

High value symbols include the lily, the stringed instrument (possibly a Pipa), the food, the white rabbit and the vase; 10, J, Q, K and A represent the lower values. Chang’e herself is wild and she’ll replace everything except for the archer free spins scatter symbol to help form winning combinations.

Every time a wild symbol lands on the reels it will display a number between two and five and then lock in place for the number of spins – the more locked wilds on the reels, the better the potential wins. Landing five wilds on a payline will award the top payout of 1000x the stake

Landing at least three free spins scatter symbols anywhere in view will award a random number of spins as follows:

It’s not possible to trigger any more spins from within this round but the number of paylines increases to 243 which means that wins are formed as long as there are at least three matching symbols on adjacent reels starting from the left hand side.

Chang’e is a nice addition to the massed range of Chinese-themed slots available – come for the free spins but stay for the locked wilds which hit refreshingly regularly.