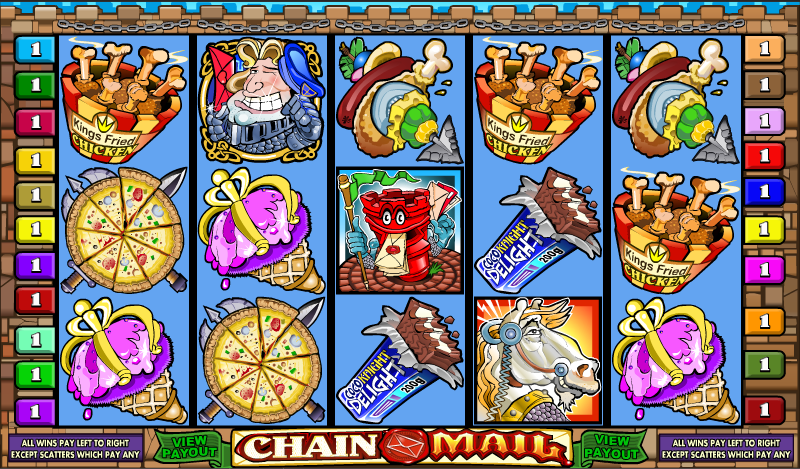 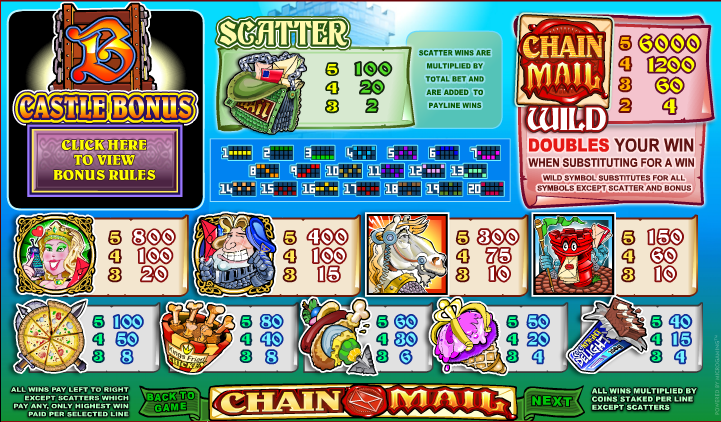 Some online slots merge various genres seamlessly and some others mix themes in a mysterious kind of way; Microgaming’s Chain Mail falls into that latter category and even after playing it for some time we’re not exactly sure of the subject matter.  There’s some appropriately medieval stuff going on here which relates to the title but there’s also actual mail – letters and the like – plus a range of fast food. Make of it what you will.

Chain Mail has five reels and twenty paylines and it’s a certainly a colourful affair; it’s set against a backdrop of fortified castle walls and all the symbols are related to certain aspects of the theme.

From low to high value we have a ‘Cocoknight’ choc ice, an ice cream wearing some gold headgear, a sort of arrow kebab, a bucket of fried chicken, a pizza, a red post box, a horse and the male and female leads (she’s speaking on a mobile phone so this game may not be completely historically accurate).

The game’s logo is the wild, there’s a green postbag scatter and the raised drawbridge is the bonus symbol.

The drawbridge is also a scatter symbol and to trigger this mini-game you’ll have to land one anywhere on reels one, three and five on the same spin. You’ll know be taken to a screen featuring five row of seven doors and you must click a door on each level starting from the bottom. Check it out in the video below.

There’s a bonus amount behind each one and you may also find Princess Roxy or Uncle Mordread; Roxy will win you all prizes on that level while Mordread will boot you back to the base game with your winnings so far.

If you prefer playing with low stakes that’s Ok because you’ll still have the same chance of triggering the Castle Bonus; more paylines though mean more winnings.

This is a cheerful enough slot with an interesting bonus game and a real mix of genres; play it when you’re hungry and you” soon find yourself phoning the local takeaway.