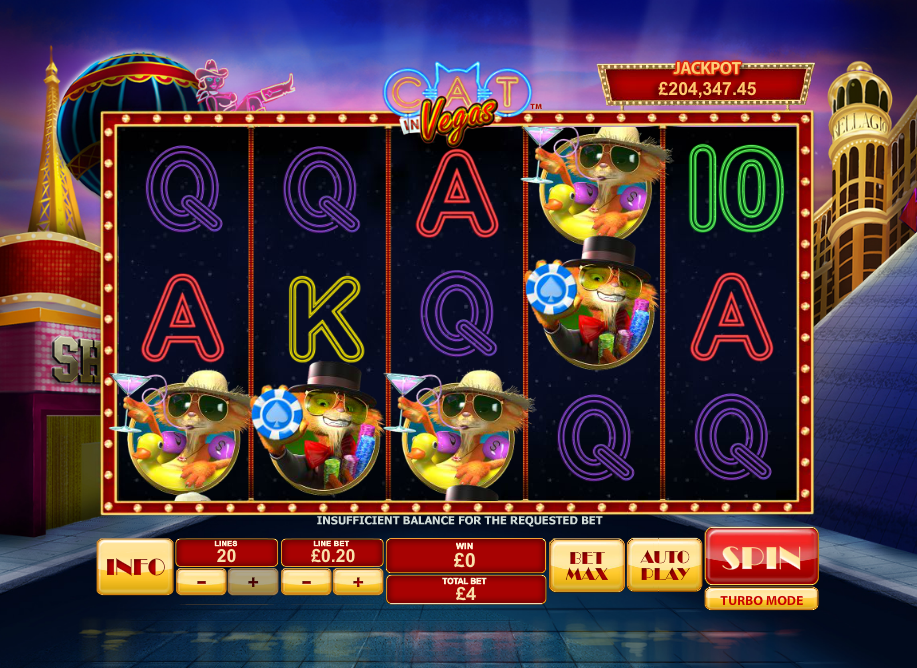 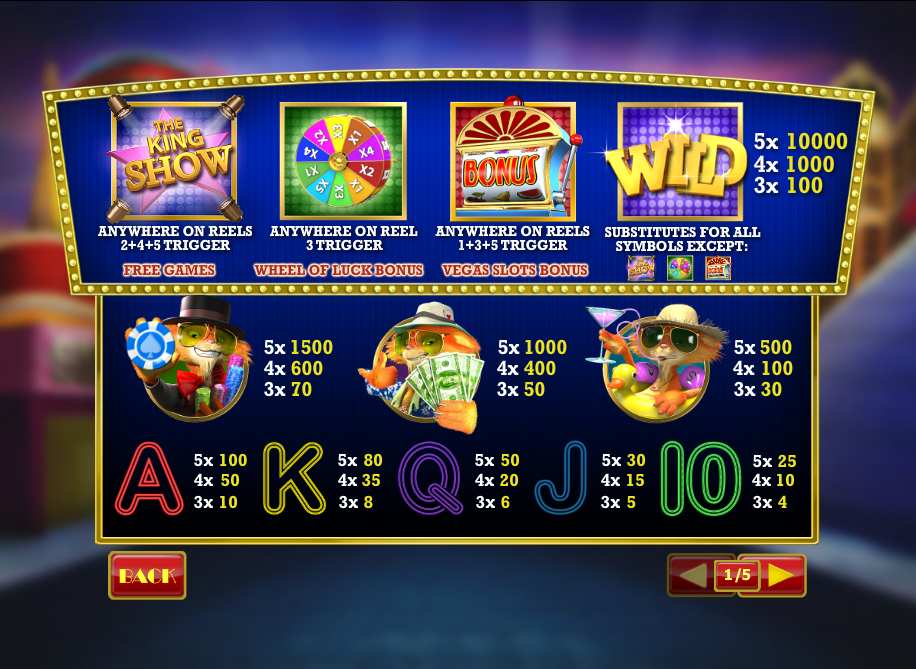 The intro movie to Cat In Vegas, the brand new online slot from Playtech, shows a cat reminiscent of a Hunter S. Thompson character approaching Las Vegas across the desert. As he nears the gleaming city his outfit becomes smarter, ready to hit the casinos. Follow our feline hero – Felix – as he spins the reels in search of numerous bonus features and a tasty progressive jackpot.

Cat In Vegas is a five reel slot with three rows and up to twenty paylines; the famous Las Vegas strip is visible behind the reels which are themselves brightly lit in colourful neon.

There are just three high value symbols – Felix relaxing with a drink, with a handful of dollars and a stack of casino chips. 10, J, Q, K and A make up the lower values.

The wild symbol is a big golden ‘Wild’ and there are three scatters – ‘The King Show’, the Wheel Of Luck and the slot machine which activate separate games.

Trigger this bonus game by landing three of ‘The King Show’ scatter symbols anywhere on reels two, four and five. An Elvis-style show now takes place on the reels which will award up to twenty spins and five sticky wilds. The Elvis character will now dance to determine the position on the reels of the wilds which will remain in that place for the duration of the spins.

You just need to land one Wheel Of Luck symbol on the centre reel to trigger this mini-game. Felix will now spin the wheel for a multiplier prize. He will continue spinning the reel until you land on a previously visited segment at which point the round is over.

This feature is triggered by landing three of the slot machine symbols anywhere on reels one, three and five and it’s also where the progressive jackpot can be won.

Felix will get to play four slot machines which award multiplier wins until they become ‘out of order’. Watch out though for the sequence of red lights above the reels; if they are all lit up you will win the huge progressive jackpot.

There are no minimum wagering requirements for the progressive jackpot so single-line playing low rollers have an equal chance of hitting the big bucks.

Cat In Vegas obviously looks good, sounds good and it packed with bonus features and that progressive jackpot. The only drawback is the unusually low RTP of 92.00% which may put off those players not interested in the jackpot prize.