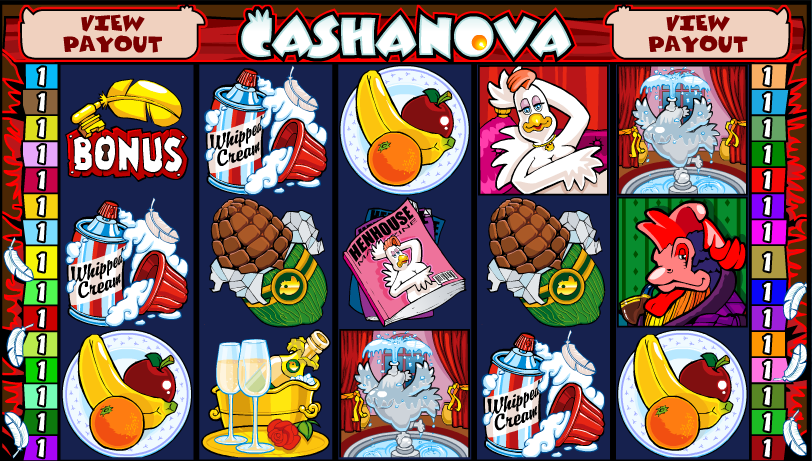 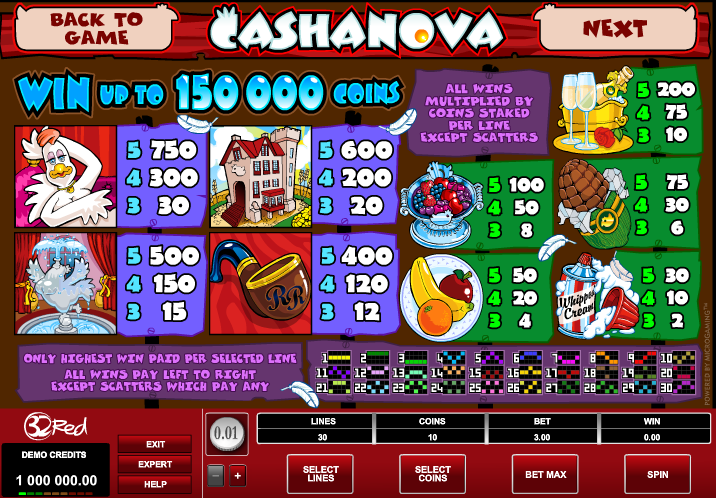 Giacomo Casanova was a social commentator who lived in 18th century Italy; these days we associate the name with his romantic adventures and it’s that character which provides the theme for Cashanova, a feature-packed online slot from Microgaming. There’s a twist of course and our eponymous hero in this game happens to be a chicken.

Cashanova plays out over five reels and thirty paylines and most of the action takes place inside the luxury chicken house;  the lower value symbols are represented by a range of ‘romantic’ symbols which include some whipped cream, carefully arranged fruit, corn, a bowl of berries and some champagne. Higher values are a monogrammed pipe, a fountain, a white chicken and the house.

This is triggered by landing three of the gold keys anywhere on reels one, two or three; you will now get to play a game in the barn where you select from a collection of nine objects. Each object will reveal a cash amount, the key to the henhouse or the dog. The dog will end the round but finding the key will win you all prizes on the screen plus entry into the Get Lucky feature.

The Get Lucky game is another ‘pick the object’ game but this time there are only five objects to choose from.

If you’re expecting some free spins then you won’t be disappointed; landing three of the fried eggs scatters on reels three, four and five will trigger this feature.

As you can see from the video below, initially you will pick from three rows of fried eggs which will determine the number of spins awarded, the multiplier and an extra coin win. The spins will then begin and you can watch as the payouts mount up.

All the features are triggered by scatter symbols so you can pay with as many or as few paylines as you wish and still have the same chance of activating the mini-games.

There’s not much wrong with this game; perhaps some more chicken-related sound effects would be nice but there are enough features and colour for us to recommend it.