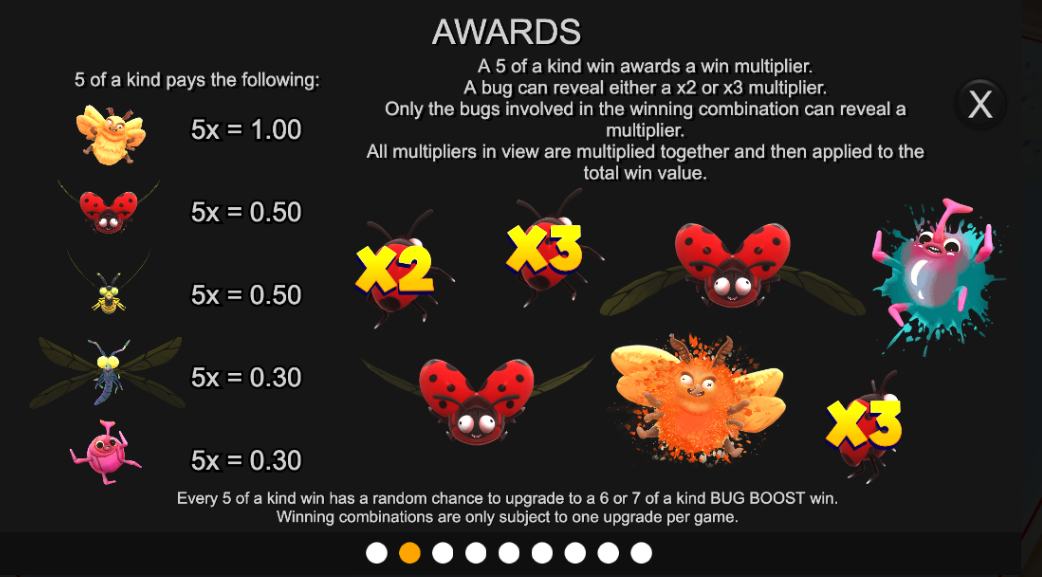 Imagine driving down the road and having to use the windscreen wipers to clean off the splatted bugs and insects every few seconds; well the gameplay in Cash Bug, this online slot from Inspired Gaming, works just like that so keep reading to find out more about this insect slaughter.

Cash Bug has no reels or paylines as such but with each spin seven insects come flying towards the windscreen to commit suicide – your aim is to land at least four matching ones to win some money while watching the clouds and buildings pass slowly by on this sunny day.

There are just five different insects in Cash Bug including a ladybird, a bee, a dragonfly and a couple of others we’re not sure about – there are no wild or special symbols here but no matter.

While you may only need four insects to land a win, landing five will add a win multiplier into the equation – any insect which is part of the winning combination may reveal a 2x or 3x multiplier of your win and more than one multiplier value will be totalled.

While landing five of a kind is good in a multiplier kind of way, landing six or seven will trigger the Bug Boost and here you will get to select those insects involved to reveal cash prizes or multiplier amounts between 2x and 25x. All multipliers are totalled and applied to the prize amount for (hopefully) a hefty win.

Cash Bug is certainly an odd little slot but not an unenjoyable one, especially the graphics which move you along the road as the bugs suicidally fling themselves towards your car; you’ll need to land five of a kind combos to grab any decent wins though.